Vauxhall's muscle car, the V8-engined VXR8 sports saloon, gets an upgrade for 2011 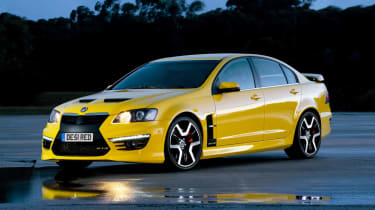 Vauxhall has unleashed the new VXR8 sports saloon, which goes on sale in January 2011.

The fourth-generation 6.2-litre LS3 V8 from the previous model remains and produces 425bhp and 406lb ft of torque, thumping the VXR8 to 60mph in just 4.9sec. It’s based on the new HSV (Holden Special Vehicles) E3 GTS. Holden is Australia’s equivalent of Vauxhall, don’t forget.

At £49,500, the updated VXR8 is almost £15,000 more expensive than the previous standard model and £5000 more than the Bathurst S edition, which had an extra 145bhp. It still manages to undercut its traditional competitors, though (the 417bhp Lexus IS-F is over £6000 more) and is now successfully distanced from its Vauxhall Insignia VXR stablemate.

If you just want to hear the LS3 V8, it’s also used in the Chevrolet Camaro, which is due on sale in the UK for circa £30,000. See the two battle it out on video.

Up front, the VXR8 has MacPherson struts and progressive rate coil springs, while at the back there’s a multi-link independent set-up. Whichever transmission you choose (a six-speed manual or an auto), it’ll be hooked up to the rear wheels via a mechanical limited slip differential.

The vicious Vauxhall comes with the Magnetic Ride Control (MRC) suspension system, seen on the Chevrolet Corvette ZR1, which adapts to road conditions and driver inputs, making alterations up to 1000 times a second. The damper units are filled with magnetic particles that harden when an electric current is sent through.

There’s a launch control system that Vauxhall claims is so good that acceleration runs vary by are no more than 0.1sec.

The new Enhanced Driver Interface - which is displayed on a 5in screen - could be the source of plenty of bragging rights. It shows data such as G-force, power and torque, lap times and the degree to which the driver is drifting. The data can then be downloaded and analysed using the supplied software.

The VXR8’s appearance hasn’t changed much, although it does look more aggressive, thanks to a new grille and more angular front and rear styling, and, in yellow at least, incredibly unsubtle. Though it could be said that its brutal look is lessened slightly by the glitzy new LED daytime running lights.

The 2011 Vauxhall VXR8 will be available to order next month, and can be bought from just seven specialist VXR dealers in the UK, though a total of 34 VXR outlets will be authorised to maintain the model.