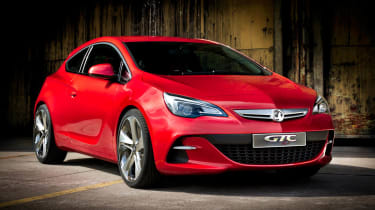 These are the latest pictures of Vauxhall's GTC Paris; a three door sporting hatch variant of the Astra that the manufacturer intends to unveil at the French motor show on September 30 2010.

The photos show the concept car's interior for the first time, featuring bespoke front bucket seats as well as minor GTC detailing. The seats are trimmed in contrasting sections of leather and micro-fibre in a style that Vauxhall are calling a 'positive/negative effect'; red with black highlights for the driver's seat, and vice versa for where the passenger will reside.

There is also a smaller leather-bound steering wheel, which along with the seat-backs, door grabs and gear-lever, features metal inserts to add to the hatchback's premium feel.

Click for more photos and details of the Vauxhall GTC concept

With the possible exception of showy 21in alloy wheels and some minor details, the impressive concept is about as close an indication as we will get to the look of the forthcoming three-door Astra due to be released in late 2011. Although the car has dispensed with two doors, it is claimed that the GTC will lose little in the way of practicality, still being able to swallow five people and their luggage in comfort.

The concept is fitted with a turbocharged direct-injection 2.0-litre four-cylinder engine, equipped with stop-start technology and an electronic limited-slip differential. It's a unit that hints as to the potential of the new Astra VXR, with regular models featuring Vauxhall's 1.4 and 1.6-litre turbo fours. Our Vauxhall Astra SRi 1.4 turbo review is here.Click for more photos and details of the Vauxhall GTC conceptAll of evo's 2010 Paris motor show news is here