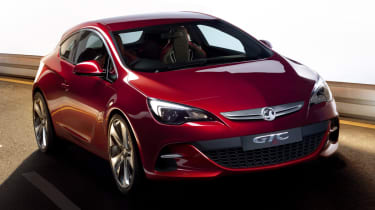 Vauxhall has revealed its new concept, the GTC Paris. And we’ll award you no prizes for guessing it heavily previews the new three-door Astra Sport Hatch. Or that it’ll be revealed at the 2010 Paris motor show…The company describes the GTC’s appearance as ‘bold, pure and iconic’, though in truth it's just another smart, premium-looking Vauxhall following on from the new Astra five-door and the Insignia. It boasts many of their styling flourishes, including that backward sweeping line in the doors. It also gets the obligatory LED daytime running lights, Vauxhall’s new signature grille and some monster 21in alloy wheels. Expect those to drop in size when the production Astra Sport Hatch arrives. A specially designed chassis sits underneath the bodywork. We take that to mean a slightly stiffer, sportier take on the already decent driving Astra, with an updated version of Vauxhall’s adaptive damping system, an electronic limited-slip differential and the new Astra’s Watt’s link rear suspension present. As well as Vauxhall’s usual mix of 1.4 and 1.6-litre turbo engines, a four-cylinder 2-litre turbo engine has been announced, presumably for the new Astra VXR. It comes complete with direct injection and start/stop tech, in order to give good punch and improved economy all at once, though no figures will be announced until the Paris show opens on September 30. Evo will be live at paris, so bookmark our motor show page for all the latest news. Click here for our new Vauxhall Astra SRI review