This re-badged Australian muscle car has always offered plenty of bang for your buck, and early second-hand Vauxhall Monaros are now true performance bargains. Here’s all you need to know 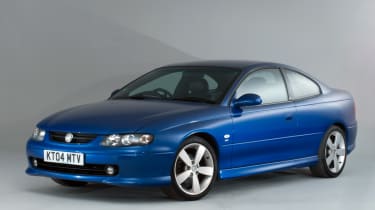 Of all the good things to come out of Australia – some fabulous new world wines, Nicole Kidman, the combine harvester – a capable muscle car is probably the last thing you’d expect. Yet that’s exactly what we have here: a good-looking coupe with a V8 engine that’s nothing short of sensational.

The car we know as the Vauxhall Monaro is fundamentally a re-badged Holden, a domestic Aussie brand that for years has coupled basic technology with big engines. Nothing new about that, but what set the Monaro apart from other Australian cars was its appeal and its appearance in other markets. It made it to the USA as the Pontiac GTO, and when it arrived on UK soil in 2004 it became the most powerful road car ever to wear the griffin badge.

The first Monaro to arrive was the CV8, fitted with a 329bhp version of the 5.7-litre, normally aspirated V8 small-block Chevy engine. With its understated looks, it was the cause of many upsets and raised eyebrows, being capable of hitting 60mph from rest in 5.3 seconds before going on to 160mph. Hot on its heels came the VXR version. With 377bhp, more purposeful bodywork and larger wheels, it really established the Monaro as a player.

In 2005 the engine grew to 6 litres (new bonnet vents helped keep it cool) and power went up to just shy of 400bhp. It didn’t stop there, though. In late 2006, just before the end of the production run, Vauxhall added a supercharger that upped power to 493bhp (500 PS) and torque to 500lb ft for the limited-edition VXR500.

The interesting thing about the Monaro is that without its superb engine it would be just another car. Fitted with a large V6 or a diesel, it would be a huge, wallowing boat with an interior that, although admittedly well-equipped, is made of materials that would be more at home in a mid-1980s minicab. The commercial vehicle-derived gearbox is vague and lumbering, the suspension is both twitchy on bumpy roads and floaty on crests, and fuel consumption is, frankly, terrifying.

However, it does have that engine, and although the rest of the technology could most kindly be described as ‘traditional’, the whole thing works as a package. Just fire the engine up – whether the 5.7 or the 6.0 – and its raison d’être is clear. The exhaust note is spine-tingling, and on the move the surge of torque through the gears is relentless. Soon the iffy gearshift fades to the background, the ride and handling make sense and a mischievous grin inevitably begins to spread across the driver’s face as the Aussie muscle car works its way under your skin.

‘I’m a Kiwi originally and have had various Holdens in the past, so when I heard that Vauxhall was bringing the Monaro into the UK, I thought it would be a bit different from the usual Audis, Mercedes or BMWs. I’ve always been a V8 fan and the Monaro pushed all the right buttons.

‘It is very good value – you get a lot of car for your money and it’s very well equipped. The downside is the fuel consumption – the only things less eco friendly are Lamborghinis and lorries. Day-to-day I get around 20mpg, but 30mpg is possible on a long run.

‘Although my car has a really high mileage, I haven’t had any problems with it that haven’t been age or mileage related. Regular servicing costs about what you’d expect to pay for a Vectra and I reckon the car will probably fall to bits around the engine eventually.’