Rare, reliable and packing as much as 493bhp, the Vauxhall Monaro is hard to ignore. But how do you spot a good one? 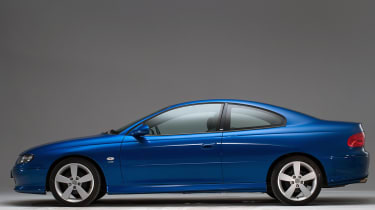 We spoke to Roger Keys from Monkfish Performance, a Monaro specialist near Milton Keynes. According to Roger, the car is generally pretty solid but there are several points to look out for.     Engine

Essentially, the 5.7 (LS1) and 6.0 (LS2) engines are the same and any problems are likely to be common. ‘Both engines can be a little noisy on start-up,’ says Roger, ‘but this should disappear as soon as they warm up. The noise could be hydraulic tappets building oil pressure or a little piston slap, which is acceptable as long as it clears when warm. Oil seepage around the bell housing is also fairly common and tends not to indicate any major issues. However, a heavy oil leak will need looking into.

‘The tensioners for the ancillary belt can be a little squeaky, which is annoying rather than dangerous, and buyers should check the coolant hoses, as these can leak where they rub on the cylinder heads. Also, the throttle bodies can cause problems on the 6-litre engines, meaning an expensive repair, so check that the throttle responds properly.’Transmission

The Monaro’s transmission is pretty crude but should last well. However, Roger recommends checking gear selection: ‘The selector forks on fifth and sixth gear can wear or fail, making it impossible to select these gears. Unfortunately, the only solution is a rebuild. Buyers should also make sure that there is no vibration from the drivetrain, which could indicate broken propshaft joints.

‘The limited-slip differential is usually pretty reliable but they do frequently “clonk”. An oil change to a decent quality oil will rectify this, but if it’s noisy when it’s cold then it is probably on its way out.’

The Monaro’s suspension has always been a bit of an Achilles heel. Early cars were very soggy and VXRs tend to eat dampers. ‘Monaros can go through dampers in as little as 10,000 miles,’ says Roger. ‘The front strut top mounts can get noisy, meaning replacement bearings are needed, and the front suspension also tends to go out of alignment, scrubbing the insides of the front tyres.

‘The steering rack gaiters on 2004 VXRs can also perish and get burned, as they are very close to the exhaust system – we can fit heat guards to prevent this.’

Coming from Australia, Monaros weren’t undersealed from new, so a decent rustproofing treatment is good for peace of mind. Regardless, it’s worth having a look around for signs of tin-worm. ‘The front chassis rails can fill with water and while they are designed to drain, the hole usually gets blocked,’ warns Roger. He also recommends a good check of the bodywork generally, as many Monaros have found their way to the bodyshop after an off. Interior

Like the rest of the Monaro, the interior is generally strong, albeit rather dated. Check that all the electrics work and make sure that the carpets are dry: ‘Water can find its way in past the door seals,’ says Roger. The seat runners on high-mileage cars can also wear, allowing the chair to move back and forth under acceleration and braking.

Parts Prices - Supplied by Monkfish Performance, Bucks. Prices include VAT at 17.5% but not fitting