Vauxhall's final, brilliant VXR8 GTS-R celebrated the end of the Aussie muscle car, can it still learn anything from its great granddad? 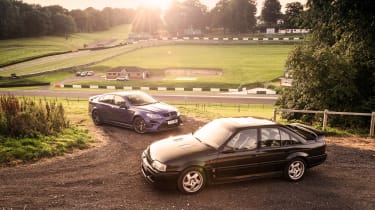 I can’t help but smile when I spot the Carlton. Parked in a leafy corner of the car park, dappled in sunlight, it looks smaller than I remember, like Curly Wurlys do. It’s hard to imagine the outcry that met this car when it was revealed in the early ’90s, the terror it fermented, due in part to the fact that it was a Vauxhall saloon car with 377bhp that could do 176mph. You’d think it was going to eat babies and tilt the world on its axis. Where would it all end, came the cry - little hatchbacks with 400bhp? SUVs with 600bhp? Well, um, anyhow…

It did tilt one world on its axis, too. Mine. I fell in love with the Lotus Carlton the first time I drove it. It was just my sort of car; incongruous, unfeasibly potent and able to oversteer for England. I was working for Performance Car magazine in 1991 and made it my nomination for our Car of the Year contest. Various staff and contributors nominated cars including the 964 911 RS, TVR V8S, Honda NSX, Ginetta G33 and BBR MX-5 Turbo. Our back page columnist at the time, Jeremy Clarkson, scoffed at the Carlton. He nominated the Audi S2. I scoffed back. The Carlton came an honourable second to the sublime NSX, the Audi was nowhere. And that was the last we saw of him.

> Click here for our review of the VXR8 GTS-R

The thing about the Carlton was that despite its stupendous potential, it was also an effortless long-distance car, with impressive comfort and refinement, all of which had become apparent to the team as we made our way from the PC offices in Peterborough to the main venue for the Car of the Year contest, Cadwell Park circuit, nestled in the folds of the Lincolnshire Wolds. The Carlton wasn’t the sharpest tool on track but I made sure it left the longest black lines. We were using the short circuit, which hooks a hairpin right before the Mountain section, and I found that with commitment, I could get round in second gear, flooring it early so the boost would kick in before the Carlton was straight and light up the rear tyres, allowing oversteer almost to the first corner.

I loved it. Non-enthusiasts, however, must have wondered at the purpose of this ridiculously overpowered saloon. Vauxhall was, after all, the sensible company that made the Cavalier and would a few years later replace it with the Vectra, the most exciting feature of which was the widget for getting the tyre valve caps off, according to a presenter called ‘Clarkson’.

But there is a long-established performance streak in Vauxhall’s DNA. In 1913 it was the first company to offer a 100mph road car, the Vauxhall 30/98, and in the 70s and 80s it produced a series of glorious, cartoonish race cars powered by monster V8s that were campaigned with great success and exhuberant flair by the likes of Gerry Marshall and John Cleland. There were the Firenzas ‘Old Nail’ and ‘Baby Bertha’, their engine bays stuffed with huge Chevy V8s, followed by a beefy Carlton TS6000 ‘Thunder Saloon’ with the same. In short, Vauxhall had previous, but even so, it was a bold move to commission Lotus (then part of the GM stable) to make a twin-turbo, BMW M5-baiting Carlton.

Some 15 years later, when Vauxhall established the VXR performance brand, it decided that the ideal flagship would be the Australian-built HSV (Holden Special Vehicles) Monaro coupe with a griffin badge stuck on its nose. The Monaro was priced to compete with the BMW M3 and what it lacked in European sophistication, it made up for with six litres of stonking V8. Almost. From 2008, it was succeeded by versions of the Commodore saloon based first on the HSV Clubsport, then the E-series and finally the Gen F we have today. And it will be the last of the V8 super saloons because, sadly, Holden production in Australia ends this October, which means the end of all Australian car production, Ford having already closed its doors.

So this Vauxhall VXR8 GTS-R, powered by a 587bhp, 6.2-litre, supercharged V8, is the last of the line. Compared with German rivals it’s an aggressive, brash-looking thing, and it absolutely dwarfs the Carlton: it’s the Millennium Falcon to the Starship Enterprise. Its 20in wheels are filled with massive discs almost the size of the Carlton’s 17in pastry cutter alloys, and if you think the outside is busy with all those vents and scoops, check out the cabin. In the past, Australian interiors like the Monaro’s tended to reflect American philosophy, which seemed to be ‘look, we spent the money on the engine, alright?’. That’s gradually changed over the years, culminating in the multi-facetted, satin chrome-embellished smorgasbord we have here. It’s a bit much for me. What instantly impresses, though, is the seat; it’s generously proportioned but beautifully shaped and so grippy. You feel cupped, and with almost 600bhp going through the rear wheels, that’s a good feeling.

Over the years there have only small numbers of these rebadged HSVs have arrived here, latterly via the small series type approval route. The maddest of all is probably the pick-up, the Maloo (which can only be said in an Australian accent), though the price of this GTS-R sounds crazy to some. It retails at £74,500, which is a lot but still less than the usual German suspects, and exclusivity is guaranteed as this is one of only 15 landing here. And they’re all already sold.

> Click here to see what happened the last time we pitched the Carlton against a modern super saloon, the BMW M5