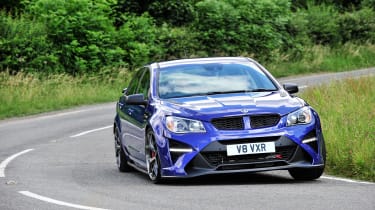 Vauxhall launched its most powerful ever model at the Goodwood Festival of Speed - the Australian-built VXR8 GTS-R. Based on the same VXR8 saloon that Vauxhall has been importing from Holden in various forms since 2007, the GTS-R is one of a series of limited build models the Australian firm are building to commemorate the end of Australian manufacturing.

The GTS-R shares the standard car's 6.2-litre supercharged LSA V8 with light modifications resulting in a peak power of 586bhp and 546lb ft of torque (improvements of 10bhp and 1lbft respectively). These figures help the GTS-R claim the title of Vauxhall’s most powerful car ever, an accolade likely to stand for quite some time.

Aside from the engine upgrades, the GTS-R’s biggest modifications have been in the pursuit of sharpening the large saloon's dynamic ability. Wider 20-inch forged front wheels house larger six-piston monoblock brake calipers and 410mm discs. The new front end has been developed to improve grip on the front axle while the larger rear tyres have the job of trying to rein in the engine's considerable power.

> Click here for our full review of the VXR8 GTS 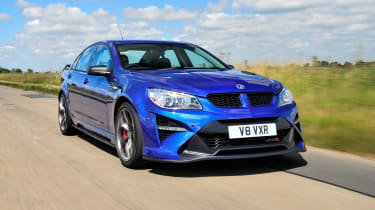 Visually, the GTS-R has more aggressive styling at the front and a new diffuser and rear wing at the rear. The standard VXR8 is hardly a subtle car, but these changes, as well as the option of bright new colours are likely to make it stand out at the next Vauxhall owners meet.

Available exclusively as a saloon, the VXR8 GTS-R will be limited to 15 units for sale through a select few Vauxhall dealerships, complete with the full 3-year warranty. Unfortunately, the Touring estate and Maloo pick up will not be available in GTS-R spec in the UK.

With a sticker price of £74,500, the notion of spending that amount of money on a Vauxhall might seem a little excessive, but that did not stop HSV developing an even more expensive and powerful 635bhp version of the GTS-R dubbed W1, which won't make it to the UK.