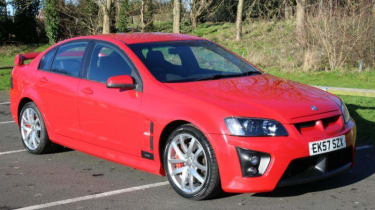 Earlier in the week the evo team was called upon to pick its favourite V8 engines. Among them were Hyabusa-derived screamers, the venerable Rover V8 and a 900-horsepower IndyCar unit, but we are but a small team and couldn’t possibly cover every base given limited space.

Dickie Meaden did sneak in mention of a small-block Chevy V8 though and it’s one that plenty more suggested in the comments. That’s little surprise, given Chevy’s V8 is one of the most numerous of its type available, as well as being highly tuneable and also very reliable.

The difficulty is in finding cars equipped with the small-block V8 in the UK. In a land of expensive fuel and far from expansive roads, smaller engines have tended to dominate, and it takes a certain degree of foolhardiness to run one on anything but a temporary basis.

We welcome foolhardiness though, and welcome the car into which most UK-bound small-blocks have been dropped: the Vauxhall VXR8.

Corvettes, Camaros and the earlier Vauxhall Monaro (nee Holden) all used a similar powerplant, but the LS2 in the VXR8 has been the UK’s most prominent taste of small block power.

Simple in design but hardy and powerful, the LS V8 has made the VXR8 something of a shining beacon of desirability in Vauxhall’s otherwise dreary range. 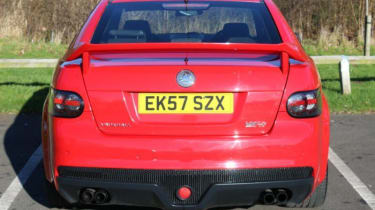 That’s been taken further in recent years with the LSA – a supercharged V8 also used in the US-spec Chevrolet Camaro ZL1, and turned the VXR8 into a car to put the willies up BMW M5s and E63 Mercs, but while the Vauxhall undoubtedly offers great value next to cars like that, a £55,500 price tag is stil out of the reach of most.

The £17,750 of this red 2007 example, for sale with Parkway Motor Group in Mansfield (through Classic and Performance Car), is much more like it. The VXR8’s styling has changed little in the past decade so there’s little to mark it out as an older car and while it lacks the LSA’s supercharger the LS2’s 412bhp is hardly weedy.

Kit levels are high – you get electrically adjustable seats, climate control, parking sensors and more – and the car appears, outwardly at least, to be in good condition. There’s a full service history to back that up.

There are cheaper ways to buy a V8 of course – old BMW 540s and Lexus LS400s are still plentiful – but if you want a taste of the reason evo loves a good V8 engine, the VXR8 is a great introduction.

> Find Vauxhall VXR8s for sale on Classic and Performance Car