What's a VXR8 I hear you ask? An over-the-top V8 performance Vauxhall from down-under for just £35K 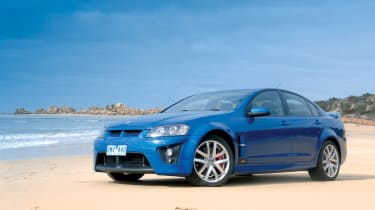 You can tell that they’re itching to mention cricket. And I’m absolutely certain that more than once over the three days a muttering of ‘Pommie b*****d’ is bitterly gulped back. But not once do I have to use my carefully prepared ‘I’m sure Webber will get up to Coulthard’s pace soon’ retort. It’s an unprecedented, almost unsettling display of Antipodean restraint and the only possible explanation I can think of is that the Aussies must really really want us to like this car.

Yes, it’s badged a Vauxhall but, like the Monaro before it, the only part of this VXR8 to come from Luton is the Griffin badge. What you’re looking at is a Holden, which will be shipped to our shores from one of the sunnier parts of GM’s global empire on the other side of the world.

The fundamentals of the VXR8 are based on the all-new ‘VE’ Commodore, a car designed from scratch inside Holden HQ at Fisherman’s Bend just outside Melbourne. The Commodore was launched last year and has subsequently been draped with laurels by the local titles: it was Wheels magazine’s Car of the Year and Motor magazine’s ‘Bang for your Buck’ champion. But the Commodore is merely the foundation for the VXR8 – your basic 5-series or E-class underpinnings, if you like.

The final car is the product of HSV, Holden Special Vehicles, the Aussie firm’s M Division, its AMG. The VXR8 (badged as a Clubsport R8 in the land of Madge Bishop) has a huge, 126mm longer wheelbase within the same overall body length, while the track has been widened by 33mm at the front and 41mm at the rear. Visually, the front end gets flared wheelarches with distinctive ‘E’ vents tucked on their trailing edges. At the back there are totally new light-clusters complete with ultra- bright LED rings for the brake lights. There’s also a rear diffuser and a big rear wing, although they’re more style statements than wind tunnel-honed necessities.

It’s a clever design though, because the stubby overhangs shrink what is actually a very large car. The VXR8 looks narrow too, yet get inside and you’ve got as much elbow- and leg-room as in a 7-series or S-class. The interior has clearly taken ‘inspiration’ from Audi in the design of its switchgear. Even the key is very flattering to the designers in Ingolstadt. And yet despite this it still doesn’t ooze the tactile quality of its German competitors, although the flat-bottomed steering wheel is very nice to hold and feels just the right size.

The one morsel the new VXR8 carries over from the old Monaro is the 6-litre LS2 V8. And that’s a very good thing. It’s a splendidly bullish engine, big and powerful by nature and utterly different to the lean, toned European V8s. You can’t help but like it. This is a new ‘Generation 4’ version, meaning an upgrade in the engine management system. It also now has ‘Camel Mode’, which doesn’t mean it randomly spits in your face but that it will get you home even if you lose all engine coolant.

The ironic thing is that, despite their abundance, driving a big V8 supersaloon in Australia is largely pointless because the speed limits are tighter than Dame Edna’s undercrackers. The test route takes us down the Great Ocean Road, the most fabulous stretch of swooping, cambered tarmac. It rises and falls behind the beaches (one of them Bells Beach where they filmed the last scene in Point Break) and along the cliffs of Victoria’s coastline and is undoubtedly one of the world’s great roads.

But we’re in convoy, about eight cars nose to tail, pootling along at a gnawingly painful 80kph (50mph). Everyone is understandably slightly nervous after the repeated warnings about police potentially skulking around every corner, but it still feels as distressing as drinking alcohol-free lager.

After one particularly fantastic stretch that we took at a pace more conducive to a light afternoon nap I decide that enough is enough. We haven’t seen a cop for the last ten miles and caution seems due for throwing to the wind, so I duck out of my place in the middle of the queue, make a swift U-turn and head back along the empty road.

As you begin to attack a road rather than just cruise, the VXR8 instantly does a very impressive trick; it seems to shed half its bulk and shrink around you. The steering is key to this. It’s wonderfully precise and accurate, giving you real confidence in the front end, which tacks into corners with remarkably little inertia given that there’s a whacking great bent-eight in front of you. The steering is a touch light once on lock but there’s plenty of feel for what the Bridgestones RE050s are coping with.

Those familiar with the Monaro’s gearshift will recognise the same DNA in the VXR8’s. The Tremec M10 remains a chunky gearbox but the throw between ratios is now considerably shorter and less ponderous. Find yourself heading into a corner in a gear higher than you want and there is now the option for a swift last-minute change – in the old coupe you’d just have to hope that the V8’s torque would cover your mistake. The only slight complaint is that second gear feels just a little too short.

A six-speed auto is also available, which Vauxhall hopes will further broaden the appeal of its new flagship over the Monaro. It’s smooth-acting and only dents the 0-60 time by a tenth.

Cliffs are a constant presence on the Great Ocean Road, either providing a huge unyielding red barrier to wipe out on or a huge precipice to drop off. Confidence-inspiring brakes are a must. Happily, at 365mm front and 360mm rear, the VXR8’s vented discs are the biggest ever fitted to a production Vauxhall. Produced by AP Racing, the pads of the four-piston callipers have the same swept area as the optional six-piston items on the Monaro. They need a little heat in them but never once grumbled in 20 minutes of wiping chunks of speed from 1800kg of hard-charging Vauxhall. They look good too, amply filling the 19in alloys.

Given the somewhat narrow parameters of the road, it’s also amazing how friendly the VXR8 is. It eats straights alarmingly quickly, but when you arrive at the corners you never worry about the fact you’re hustling and sliding nearly two tons of car.

Barrel-in on the limit and the front will comfortingly push a little to let you know where you are, but after that it’s up to you. You can make the car flow, shimmying across the surface through direction changes, or if the chance is there you can light up the rears and indulge in a chassis that’s wonderfully easy to power-slide. It’s fluid, poised and predictable, reminiscent of BMW’s best, and gives you the confidence to really grab it by the scruff of the neck.

The only time the VXR8 starts to struggle is when you really load up its suspension. On some wickedly compressing cambered corners, the progressive-rate springs can start to feel overwhelmed as travel is used up. Also, although individual corners of the car soak up big bumps well, small imperfections draw out some resilience, leading to more of a party going on in the arches than there should be.

There is a potential answer to this. Higher spec HSVs come with MRC (Magnetic Ride Control), as found on the Ferrari 599 and Audi’s TT. This gives the option of two settings – one for comfort and one for Sunday mornings. In ‘Track’ mode, you lose the merest smidgeon of feel but the damping is controlled with much more satisfying conviction. The reasons MRC won’t be offered initially is that Vauxhall hasn’t had a chance to try it on British roads (I think they’ll like it) and that it would bump the price of a VXR8 over the fiscally intimidating £40K mark.

Several warranty-approved options will be offered by Vauxhall from the outset, however, and since 75 per cent of Monaros in the UK have been modified in some way, it seems likely they will be popular. The current list is as follows: sports exhaust, air filter and ECU upgrade giving 25-30bhp (£1800), 20in wheels (£2500), six-piston front and four-piston rear callipers (£2079), and, for £6000, a supercharger boosting power to over 530bhp. The only option we had a chance to try in Australia was the exhaust, which is very desirable, adding to the V8 score without any undesirable boom.

So who is the VXR8 going to appeal to? Well, those Monaro owners that aren’t hell-bent on having a coupe will love the new car and Vauxhall is also hoping to tempt Impreza and Evo owners into something a little different. With the option of an automatic it may even lure the odd AMG owner.

To be honest, a £35K car of this size and practicality, with this much character, that’s this easy to powerslide, shouldn’t have much trouble selling. I reckon even if Holden sent every car over here with a replica of the Ashes mounted on the dashboard, us Pommie b*****ds would still buy it.