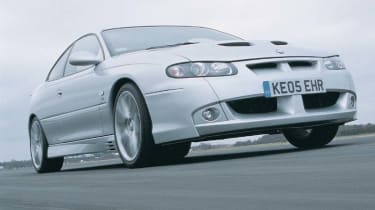 It takes very little skill to drive a car flat-out in a straight line. Even if at the end of the straight line you will be travelling at 160mph. Even so, Vauxhall has set a little challenge for the hacks lined up at the launch of the new Monaro VXR: one of the new 6-litre- engined VXRs has been fitted with telemetry and each of us is going to rumble down Elvington aerodrome's 1.9-mile-long runway. The bloke who logs the highest top speed wins a mystery prize and there are second and third prizes for the runners-up. Several journalists have muttered something about it just being a bit of fun, but it's obvious that for most of us the result is as serious as life and death. It's not quite a matter of just holding the gas pedal flat because there's a large right-hander on the perimeter track that leads onto the runway. The faster you come out of this corner, the better the head start. But before I run a few excuses for Goodwin's performance past you, a bit about the new Monaro. First, the donk is bigger. The 382bhp 5.7-litre LS1 V8 from the old Corvette has been replaced by the C6 Vette's 6-litre (same stroke, larger bore) LS2 motor that has 398bhp. Torque has increased to 391lb ft from the smaller engine's 376lb ft. Despite the capacity increase, the engine still likes revs. Between 4000rpm and 6000rpm it really starts to deliver. The biggest difference between the old LS1 and the LS2 engines is refinement. Don't panic, the 6-litre is still definitely more Detroit than Ingolstadt, but it's much smoother without losing the character. Outside, the Monaro has grown a pair of nostrils on its bonnet which channel cold air into the engine bay rather than directly into the intake system. Of course, the real function is to give the Monaro a more aggressive front end look. At the back there are now two sets of tailpipes instead of the previous car's single exit-point. There used not to be enough room for dual pipes but American regs (for the numerically more common Pontiac GTO version) have required the fuel tank to be moved upwards to behind the rear seat, thereby freeing up space above the rear axle. What you gain in freedom of pipework is lost in boot space - about a third of the volume has gone. The fiddling around at the rear end has also meant that the rear suspension has had to be tweaked to take into account the change of weight distribution. Word is that Holden's HSV engineers, Luton's finest and a few of Lotus's suspension boffins went out for dinner and talked damper valving and rebound settings far into the night. Regardless of the size of the bill, this dinner was worthwhile. Within a few miles of leaving the hotel and heading across the Yorkshire Dales to Elvington (near York) it's obvious that the VXR is better in many more areas than just engine. The previous car was masses of fun but a bit crude. The revised suspension has taken away a large amount of the crudity and left the humour. Body control is much better and the ride more sophisticated. We diverted off the planned route to York along the quieter road that leads from Pateley Bridge down to Otley. The VXR is astoundingly good across this road, especially over crests. The LS2 is slightly lighter than the old engine, but surely not enough to explain why the steering feels so much better. The actual ratio and level of assistance is the same as before, but the action is much smoother. Before, in medium-speed corners there was often kickback through the wheel. Now it's smooth and reassuring. Add this to the suspension improvements and you have a car that is far easier to drive hard on difficult roads and if anything is even more fun than before. Vauxhall has also brought along a Lotus Carlton to Elvington for us to have a go in. Risky move, this, because most journalists over the age of 35 weep nostalgic tears whenever the car is mentioned. I drove one not long ago and it's still one of the greatest cars ever made. And, although the press pack makes great promises of how the newcomer will blast the Lotus out of the record books, the old timer is probably still fast enough to seriously box the VXR. This competition is not very scientific because we're only running in one direction, and I suspect from looking at how each driver is a bit faster than the previous one that the wind is gradually changing direction. Not that this makes a difference when Goodwin gets on the gas too early and comes onto the runway on full opposite lock with both rear tyres on fire. Who cares? The Monaro VXR is one of the last great hooligan machines. And at £36,995 still a performance bargain. New nylon bushes have been fitted to the gearchange to tighten-up the mechanism. The Tremec six-speed is still slow, but the action is much smoother. There's not enough space to get into sixth here, but the motor is still pulling as I hit 160.14mph in fifth gear. Another scribbler does 162-point-something and two others better my speed. Obviously I was right about the wind changing.