The new 576bhp Vauxhall VXR8 GTS has been launched, with the new Camaro's supercharged LSA engine as well as some styling and spec tweaks. 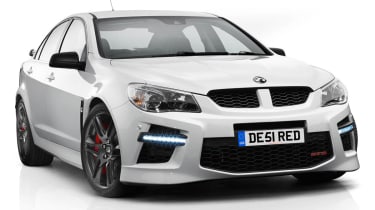 Vauxhall has officially revealed that it will be importing a revised 576bhp version of the VXR8 into the UK. This comes after the Australian Holden Special Vehicles (HSV) GEN-F GTS, on which the VXR8 is based, was unveiled earlier in the month.

Thanks to the addition of GM’s LAS V8 engine, as found in the latest Chevrolet Camaro ZL1, this latest Australian saloon has once again raised its game, with the aim of embarrassing the latest super saloons from BMW, Audi and Mercedes. The engine produces 576bhp and 545lb ft of torque, thanks mainly to the introduction of a charge-cooled Eaton supercharger.

The VXR8 gets a new six-speed manual gearbox, with the option of a conventional torque converter six-speed automatic. To cope with the extra heat from the new engine, there's also an emphasis on improved cooling. It's said to be 75 per cent more efficient than the old car, which is key for the Australian market.

Additional cooling means more grilles and vents at the front, with an almost entirely re-styled nose. The VXR8 also gets some new LED rear light clusters, rear spoiler, as well as a diffuser. Inside there are a few minor changes, including the instrument cluster, and suede inserts around the car. It’s finished off by a set of VXR leather performance seats.

Although it’s not what you would call a state-of-the-art car, the VXR8 has been fitted with a few new electronic systems. First up is ‘brake torque vectoring’, which reduced understeer by braking the inside rear wheel when powering out of a corner. Like the previous model, the new VXR8 also gets the magnetic ride control – with three independent Touring, Sport and Track settings.

When it goes on sale at the end of the year, prices are said to start from £54,995, which is around £5000 more than the outgoing model. Performance figures have not been revealed yet, but considering that this is the most powerful production car to come out of Australia, it’ll likely demolish the old car’s 4.9sec 0-60mph time, but remain limited to 155mph.