Don't buy a Monaro if you want to join a club. Since our long-termer arrived ten months and almost 15,000 miles ago, I haven't seen another on the road. I've seen hundreds of BMW M3s, yet while the M3 is the closest rival for the (very lightly) Anglicised, V8-engined Holden coupe, it seems that few Monaro VXR buyers actually have to choose between the two. For most, the Monaro is an unusual, affordable and rare toy that joins a stable of interesting cars, and I've no doubt that at the core of its appeal are 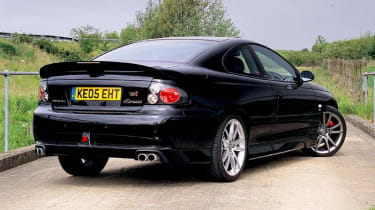 Don't buy a Monaro if you want to join a club. Since our long-termer arrived ten months and almost 15,000 miles ago, I haven't seen another on the road. I've seen hundreds of BMW M3s, yet while the M3 is the closest rival for the (very lightly) Anglicised, V8-engined Holden coupe, it seems that few Monaro VXR buyers actually have to choose between the two. For most, the Monaro is an unusual, affordable and rare toy that joins a stable of interesting cars, and I've no doubt that at the core of its appeal are a couple of big, round numbers: six litres and 400bhp.

They're the sort of figures that grab my attention too, and I was by far the keenest member of the evo team to run the VXR 6.0. Happily, it's mostly been good, big-hearted fun. Along the way we've liberated more of that huge V8's character with a sports exhaust, had some minor warranty and major dealership issues, monstered a few race- tracks, replaced the worn original tyres with a set that proved less well suited, and recorded a creditable average of 22.5mpg. I appreciate that it's not to everyone's taste, but I'm sad to see it go, even though it didn't prove as practical as I'd hoped.

The VXR first rolled into our car park last April and I knew instantly that Phantom Black was a good colour choice. You can't mistake the Monaro for a European coupe; it's more generously cut and, although quite simply styled, wears aggressive, jutting spoilers - which black paint renders a little more discreet. It's a back-handed compliment, but for me the Monaro always looked most evocative in twilight, its 19in alloys glinting, its scale imposing. Even in broad daylight there was an air of mystery about it. From the reactions I saw, many people had no idea what it was, and the Griffin badge on the bonnet didn't clarify things because, like the VX220, the Monaro has little in common with the rest of the Vauxhall range.

As with the outside, the cabin's style is a little less sophisticated than current European standards, but the Monaro's appeal always ramped up significantly when I twisted the key and the whole car shuddered as that huge V8 twisted into life. It took a little while to get into the groove with the Monaro, to get accustomed to the heft of its manual six-speed gearshift, the oddly elevated driving position and the feel of its dynamics. The ride was more pattery over small bumps than expected, the steering a fraction lighter, and the balance was a little less readable as a result. But after a couple of hundred miles you'd gain confidence in the grip and poise and start to use more of the torque on offer.

The traction control would catch and quell snap-oversteer pretty effectively, and if you switched it out the standard Hydratrak limited slip diff would allow you to use much more of the performance much earlier than you might think - slackening to stop abrupt oversteer out of junctions, but most of the time hooking up both rear wheels when you wanted it to. Around Donington Park it was huge fun, though the brakes needed some looking after.

Very early on I discovered that the Monaro was remarkably impractical for my circumstances. (When I wrote as much a reader got in touch to say that if I didn't like it he'd happily swap it for his aged Alfa.) My point was that the Monaro is a big car, yet a new three-door Astra has twice the boot space and is much easier to get two kiddie seats and kids into and out of. In fairness, the boot was cavernous until GM decided the Monaro might go down well in the US badged as the Pontiac GTO, which brought about a repositioning of the fuel tank to above the rear axle, halving the boot capacity.

This allowed a twin-exit exhaust to be fitted, though, each side sporting a pair of tailpipes, but the noise wasn't as inspiring as it could be, so just before the first service we had an approved, VXR-branded sports exhaust fitted. This gave us less restrictive sports catalysts, a larger bore diameter, a pair of fat oval tailpipes and the rumbling, bellowing note that a six-litre V8 ought to have. It wasn't cheap at £1970, but I'm not surprised that a third of all VXR Monaros have had it fitted.

A damaged lambda sensor needed replacing at the first service, which our closest VXR dealer, Crownhill in Milton Keynes, was informed of. I also asked them to look into the poor radio reception and non-functioning heated rear window, which turned out to be down to the same duff component, a faulty amplifier. To cut a long story short, the service we received from Crownhill was dreadful, with numerous unreturned phone calls and claims that the non-service jobs hadn't been notified in advance. It took a further visit over a month later to get those extra jobs sorted, by which time the quality of service had improved immeasurably, partly as a result of our published dissatisfaction.

The original Pirelli P Zeros were all but done for by the 10,000-mile service and I'd arranged a second set of rims for their replacements so that I could cremate the originals at an evoactive trackday at Brands Hatch. Sadly, that plan was scuppered after just half a dozen laps when the temporary bung in the exhaust where the lambda sensor should have been popped out. The replacement tyres were Dunlop's sexy-looking Sport Maxx, as fitted to the new Jaguar XK, but while there's no question that they work on the XK, the Monaro never quite felt happy on them, with much less wet grip and clumsier on-limit handling in the dry. Very peculiar.

Some long-term test cars grow on you as the months roll by, others lose their appeal, but I feel the same way about the Monaro as it awaits collection as I did a week after it was first delivered. I still get a buzz when I fire up that V8, and I love its easy-going, deep-chested performance and rear-drive balance and adjustability. It isn't as accommodating as it ought to be for its size, and there's a slightly off-the-pace, old-school feel about it, but overall it's a big, friendly, bear of a car. Rare, too, which counts for a lot with some people.