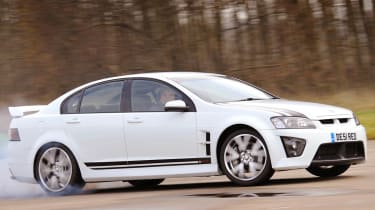 Ever thought the Vauxhall VXR8 lacks grunt? Then worry no more - this new Bathurst edition should remedy your woes just nicely.

While there's a 425bhp 'entry level' version, the headline news is the Bathurst S. It gains a monstrous Walkinshaw Performance 122 supercharger, enough to lift power on par with the Lamborghini Gallardo LP560-4. That's 552bhp, and the VXR8's 527lb ft more than trumps the Italian's 398lb ft torque figure. Apparently the LS3 V8 is capable of bigger numbers, but Walkinshaw wanted to make sure the modern day Lotus Carlton was still driveable.

Staying on that subject, the Bathurst's dynamics haven't been left untouched. Suspension-wise there are stiffer, height-adjustable springs and coil-over dampers. The latter are bespoke items that boast 15 separate valve settings and independent corner adjustment so that owners can fettle the car to their heart's content. It all adds up to enhanced body control and a more exploitable sports saloon. The brakes are also uprated with six-pot calipers at the front and four-pot at the rear.

The Bathurst S is about more than just a whacking great supercharger, too, with a large capacity intercooler, high-flow fuel injectors, a separate cold air intake and a Walkinshaw remap for the ECU. The same manual gearbox remains but the clutch is upgraded to handle the massive chunk of extra torque.

Exterior tweaks for both Bathurst models include some distinctive graphics and a splattering of 'Bathurst' and 'Walkinshaw Performance' badges and tread plates, while there’s the option of 20in alloys (£1500) and a new stainless steel Bi-Modal exhaust (£1600) which adds an extra 10bhp as well as boasting two modes. 'Street' has an upper limit of 92dbA, while 'Optimum' allows every one of the V8's 102dbA to roam free. You'll never miss a Bathurst if it's coming your way, although don't expect that to happen too often - it's a very limited model with only a handful being made available.

Vauxhall seems to be answering an unasked question with its more muscular VXR8, especially in the current car-selling climate, but it's an answer that has to be admired. The 425bhp VXR8 Bathurst costs £37,995 while the supercharged VXR8 Bathurst S will set you back £44,995. That's just £81.52 per brake horsepower…

You can read about Richard Porter's VXR8 from the evo Fast Fleet, which also enjoyed a bit of attention from Walkinshaw.