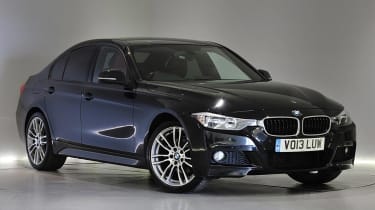 High on quality and brand appeal the Audi isn’t as dynamically capable or entertaining as the BMW. Returns of 50mpg paired with 242bhp and 369lb ft of torque sees the Audi dispatch 0-62mph in 6.1sec. Post-2012 facelift cars start from £18k.

‘First impressions are wholly encouraging. This new 3-series is a big car, but the benefit of this relentless upsizing is a spacious interior and a gargantuan boot. A Touring version would surely be the perfect family wagon. Thankfully it disguises its bulk well with taut damping, direct steering and a satisfying sense of agility.

‘It’s a livewire of a transmission and it brings the 330d to life when set in one of its more aggressive modes. There’s an urgency to the delivery that’s startling for a diesel, and if you’re in Sport Plus it even lets you run to the engine’s soft limiter. But that’s not to say it won’t mooch along effortlessly in “D”; it has plenty of shove from minimal revs. 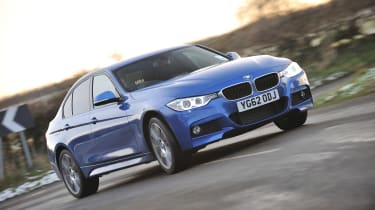 ‘BMW claims a combined 58mpg and a range of 722 miles, but if our real-world experience is anything to go by, you can expect mid-40s and a practical range of 500 miles. But, given the performance, refinement and character on offer, it’s hardly a disappointment.

‘Chassis-wise there’s much to like, too. The ride is firm enough to feel like it deserves the M Sport badge, but remains supple enough to be a pleasure on less-than-smooth roads. It turns in keenly and enjoys rapid direction changes. The brakes have a firm pedal, smooth response and plenty of stopping power. The steering is worthy of a gripe – or rather its artificial weighting and general lack of feel. But overall the 330d M Sport is a very fine car.’ – evo 180

‘I’ve always been a committed petrolhead – I’ve owned a few Ferraris and my current weekend car is a TVR – so I was always very dubious about diesels. But then my local BMW dealer, who I’d bought six or seven cars from, gave me a diesel 6-series to try for a few hours, and it was just amazing. So I bought a 640d M Sport. When the time came to change it I needed a four-door saloon as an everyday car, and the 335d, which has the same engine, seemed to be exactly what was required.

‘I bought mine brand new in May 2014 – a 335d xDrive M Sport with a few extra toys, including parking sensors and the lights that swivel round corners, which I have to say are very good, as is the adaptive damping. 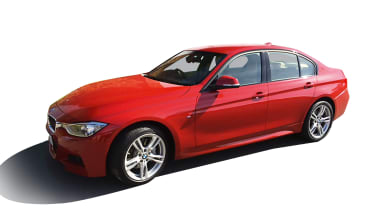 ’I’ve done 29,000 miles in it so far. It’s had just the one service. In fact, that was something I wasn’t very comfortable with, because I was literally driving the car when the phone rang and it was BMW calling to say the car needed a service. They were tracking me and they knew how many miles I’d done.

‘The service itself was painless, and in fact the whole ownership experience has been really easy. There was one small problem – in the first few weeks there was a rattle, and BMW changed something on one of the door seals, but it was only a minor irritation. The only other thing that’s niggled is not having a spare wheel – the runflats themselves are OK, but I prefer to have a spare.

‘I have to say, it’s a phenomenal engine. So much power and torque. Just a few weeks ago we did a trip to Germany and I was north of 140mph on the autobahn, yet over the whole trip we still averaged over 40mpg.