Cat S and Cat N cars in the classifieds may appeal to bargain hunters, but don’t buy before you know the full story... 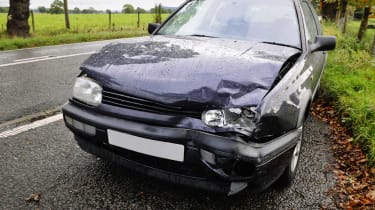 The classified bargains you find online or in print publications can often have a catch, disclosed or not: Some are insurance write-offs. The insurance write-off taxonomy has been revised, replacing Cat C and Cat D classes with Cat S and Cat N. Cat S and N cars will be positioned towards the lower end of the pricing spectrum, just as Cat C and D cars were. It makes them awfully tempting, but they should be approached with the same high level of caution.

Up until October 2017, vehicles written off by insurers in the aftermath of an accident were classed as Category A, Category B, Category C or Category D cars. The more lightly damaged ones that could legally find their way back to market were the Category C and Category D cars - usually shortened to Cat C and D.

> Cheap supercars: can you really run one on a budget?

Insurance companies write-off a car when the cost of repair exceeds the value of the car but in some cases the damage that renders a car a write-off can be safely repaired. These models are the Cat C and D models of the past and the Cat S and N cars under the new system. They regularly filter onto the second-hand market, repaired on a tighter budget by private owners or garages. Alternatively some are posted for sale still bearing the damage from the accident. In all cases, the bargain-hunting car buyer should proceed with care.

Here's our guide to buying insurance write-offs without coming unstuck.

What is a write-off?

The cause of car insurance write-offs isn’t exclusively crash damage: floods, fires, theft or vandalism can also consign a car to this fate. The owners of said car will usually receive a payout from the insurance company at which point the insurer takes ownership of the car and assesses the damage - branding it with a categorisation from Cat A to Cat N. Cat A cars have suffered irreparable damage such as a catastrophic fire and will never be sanctioned by authorities for road use again. They’re normally crushed, and can’t even be stripped for parts. Cat B cars end up with a similar fate, but parts that have maintained structural integrity can be stripped and fitted to another car for further use. For obvious reasons, Cat A and Cat B cars don’t appear in the classifieds but Cat S and N, once Cat C and D models, do.

In late October 2017, the categorisation was refreshed to better reflect the complexity of repairs on modern vehicles. In light of this, the new classification methodology reviews the condition of the car rather than the cost of repair when deciding which category to apply.

Thus Cat A, Cat B, Cat C and Cat D classes have been replaced with the following:

How are insurance repair costs calculated?

When insurers tot up repair costs, they’re doing so on the assumption that all work will be carried out at official workshops with new OEM parts. As a result, the final repair bill often exceeds the value of the car. So while insurers may not sanction repairs based on economic grounds, that doesn't mean it is not worth repairing the damaged car. Private individuals aren’t bound by the same rules forcing insurers to use official repair channels and can restore a car to good order for less.

The attraction of Cat C and D cars remains in the case of the new Cat S and N cars. The repair of superficial damage often accounts for the bulk of repair costs thanks to pricey new parts. The more frugal and persistent though can negate these costs: phoning breakers yards and trawling the internet in search for cheaper used parts, and using independent labour or even engaging in some DIY to fit them. All of which can save considerable sums of cash, making Cat S and N cars good value propositions.

> VED car tax changes: all you need to know about road tax

Those who can wield tools with some skill could carry out basic work: replacing a bumper here or painting a dent there. The savings combined with low upfront price means more prestigious and desirable cars that are normally out of reach become a real possibility.

The allure of more for less in Cat S and Cat N cars has to be balanced with risk and reward. At least the new categories provide clearer distinction. The difference between Cat C and D was simply the extent rather than type of damage sustained – Cat C cars bear greater damage than Cat D. Cat S and Cat N should endow buyers with greater knowledge of what they’re (considering) buying. If they choose, they can avoid the potential headache of a structurally damaged Cat S car, opting for solely surface-damaged Cat N cars.

It goes without saying that any car not listed as Cat S or Cat N that you suspect may have been involved in an accident is not worth entertaining. Unfortunately, some unscrupulous private sellers will try to hide insurance write-off damage from you. That’s a violation of the Consumer Rights Act – selling a vehicle not as described – and is against the law.

Thankfully, there are plenty of services to check for this. The best course of action is to perform a full HPI check to make sure. Insurance write-offs are recorded on the car’s logbook so the data you get will be accurate.

If you’re confident you can repair the damage, Cat C, D, N or S classification may be cause to get a hefty discount. But if you’re at all unsure, just walk away – remember, a seller hiding something as important as an insurance write-off is unlikely to be somebody you want to buy from.

What if you buy a car then retrospectively find out it’s a Cat C, D, N or S write-off? The seller who sold it to you is in violation of the Consumer Rights Act, which gives you certain protections as a buyer. The most useful is simply to return it for a full refund – if you’re within 30 days of purchase, this can be done with no questions asked. Otherwise, if the seller refuses to take the vehicle back, you can take them to court under the Consumer Rights Act. If it was a trade seller, reporting them to the Trading Standards Institute is a good idea, too.

The first issue you’ll face with a written-off car is value. Cat S and Cat N cars will never be worth as much as their undamaged counterparts thanks to the permanent record of the write-off – regardless of their condition after the repair. This does mean you’ve got a good case to haggle, though.

Another potential difficulty is unseen damage. A written-off car could have damage beyond the obvious – think flood damage to electrics, frame damage from a shunt or even problems caused by repairing with cheap components. Airbags in particular could be replaced with cheap, inferior parts. That’s why it’s vital to have a full mechanical check over.

And, as with any used car, remember to check everything! Don’t get distracted by checking only the accident damage – the car could still have unrelated problems with the engine, gearbox, suspension, or indeed anything else. Take it for a test drive to make sure it’s all functioning as it should.