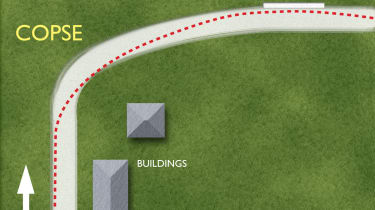 Copse Corner Copse is faster than it looks and is only a problem because the pits and scrutineering bays mean you can’t see the apex as you turn. The only way then is to familarise yourself over several laps, starting with a late turn to give yourself plenty of room on the exit, then slowly bringing it forward. There is plenty of room on the exit but bear in mind that the kerb to the left is hugely slippery when wet, so you should not rely on using it. Carrying speed through Copse is important because the drag towards Maggotts and Becketts is long.

Maggots, Becketts, Chapel One of the trickiest sequences to be found anywhere. Becketts is actually two corners which we will call parts 1 and 2, Maggots GP is just a kink and Chapel is the final, gentle curve which leads the car left onto the Hangar Straight. You can almost ignore the first, left-handed part of GP Maggots, then brake hard enough to allow as late an apex as possible for the first half of Becketts – the right hander. This will ensure you come out as far to the right as possible, ready for the more important second part (which bends gently to the left then curves a long way round to the right). Brake again and be patient - don’t try and enter the left too fast or you will run wide and mess up the most important part which is the long right hand curve of part 2.

Patience and a smooth entry allows you to run along the entry kerb on the left hand side where the road is still bending to the left, and this allows you to widen the entry for the most important bit which is the long right hander (which leads to Chapel). Take an apex slightly after the middle of the right hander’s radius and start to pour on the power. The earlier you can accelerate without upsetting the car, the better, all the time trying to avoid the need to lift through Chapel’s gentle left hander and stay flat from there all the way down the long Hangar straight.

Stowe Corner The corner turns through slightly more than 90degrees and the apex is just out of sight below the crest and you can’t see it until you are well into the turn. It’s a case of building confidence, then speed as you begin to memorise the corner, remembering too to accelerate smoothly and have the car running straight along the concrete on the left as you exit – just where the road bends slightly to the left.

Club Corner The technique for each is similar though; don’t try and brake too late for the left, but do lose enough speed so that you can turn almost in the middle of the road and run right along the left hand kerb until the road begins to open out to the right. For a change, you’re then looking for a fairly early apex – added to which the road also falls away slightly at this point - so the car will naturally want to run wide towards the middle of the road. Try not to let it get quite this far and gently pull it back towards a second apex – which is still just before the mid point of the sweep. Once there, the road opens right out and if you’re not already, you can be hard on it.

AbbeyBraking is critical because the road crests slightly (and collects a huge amount of standing water) then a late turn towards the first and tightest part to exit well to the left of the road’s centre. Then, immediately accelerate hard and aim for an apex which you can’t see but which lies at the mid-point of the shallower right handed second part. It’s just out of sight as the road begins to fall away but once you have learnt where it is, run the two lightly laden right hand wheels over the concrete slats on the right. This opens out the corner considerably and points you towards a fast exit down the hill towards Bridge.        Bridge Corner The right hander at Bridge is easier and less frightening in practice than it looks because the camber and the dip both add grip to the car and help you through the downhill plunge. The turn-in point though is difficult to judge because the bridge hides the apex, added to which, it makes a difference whether you’re in a car which needs to brake first. Ideally the turn is right over to the left, but the road is dirty here and most people turn slightly earlier and take an earlier apex, come out left of the road’s middle then wrestle the car back over to the right, ready for Priory. In a car which needs to brake, the dirty part is even less inviting, so you turn earlier still but if you are able to make a later turn in a nimble car, you can apex later in the dip then exit in the middle of the road, ready to ease right and brake in a straight line for Priory.

Priory If you exit Bridge in optimum fashion, not only will you be able to brake in a straight line, but you will more easily be able to open out Priory’s radius - and most important, be able to accelerate much earlier. The road is already wide on the entry but if you don’t make use of it, the car will simply wash out as the road turns and narrows and you’ll have to lift. Priory is faster than it looks but a lot of good laps are wasted here. Beware too, the kerb on the exit; it’s high and grippy and will launch the car at the same time pulling it to the right and on to the grass.

Brooklands and Luffield Brooklands simply requires discipline. If you try and brake too late, or enter too fast, you will wash wide and have to lift, or worse, end up in the gravel trap beyond the kerb. The apex at Brooklands is almost always later than you thought and the kerb on the left is high enough to upset some suspensions. Don’t try and brake too late on the way in either or you’ll miss the apex completely. Ideally, you should exit nicely along and parallel with the exit kerb on the right then move immediately left to the middle of the road for Luffield One.

Opinions are many and varied about the ideal line for Luffield One but most people turn relatively early and hug the inside kerb all the way round before finally letting the car open out on the exit and head for the exit concrete to the left. In a more powerful car it’s sometimes worth trying a later apex but because most people don’t, the road is dirty and you lose whatever you might have gained. Added to which, absolutely everything understeers like hell through here. It’s something you have to live with, but at least when you find yourself heading towards that concrete on the exit, you know it is available for traction. Only the concrete mind - because athough the grass beyond it probably won’t have you off, the loss of traction costs all the way to Copse.  Woodcote Woodcote is only notable because it is fast and there’s no run off area. The optimum is an early apex but in most cases feeling for this needs care only in a very powerful car with limited grip or when the road is wet. You can’t see the apex because of the start-finish gantry so until you are confident, just beware turning too early and running onto the grass on the exit. A lot of cars have turned sharp right into the pit wall.