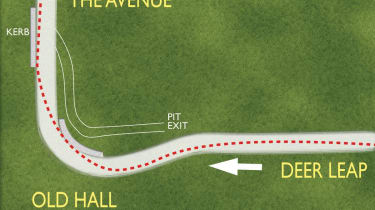 Old HallAs the pit lane exits after Old Hall, it’s actually the last corner you will come to on a trackday but it is the first turn if you’re starting a race. There are a couple of bumps in the braking zone and due to the armco on the inside you can’t see the exit from the approach, but don’t get suckered into turning too early. The apex is obvious as you begin the turn and you should let the car run on the exit. Don’t be tempted to extend the width of the track past the kerb as the grass is heavily rutted.

CascadesThe approach to Cascades is difficult as you are crossing the track from left to right while going over a crest on The Avenue. Don’t brake until you are over it but as you are now on a steep downhill slope it is easy to lock a wheel here. As you turn through the left you are working against the camber so rear-wheel drive cars tend to oversteer as you apply the power. This is a very difficult corner, but it’s crucial for your lap time as a long straight follows.

IslandTechnically this is a much simpler corner than Cascades but it takes real bottle as it’s very fast. Some cars will be at full speed on the approach and will require little more than a confidence lift before turning in. Trackday drivers tend to have a decent brake here though and in reality it doesn’t have a massive impact on lap times as you are braking for Shell Oils almost immediately afterwards. For that reason you don’t need to use the full width of the track on the exit.

Shell OilsThis hairpin is faster than it might appear due to it being heavily cambered. Once you have turned in you should ride it around the inside, making the most of the banking. It’s a constant radius so once settled you keep the steering and throttle inputs constant. Run out to the edge of the track on the exit, but be careful here as grip levels fall as the camber levels out.

Britten’sThe first of two chicanes in this section of track has an approach complicated slightly by a curved braking area. It’s an awkward chicane that has some quite jagged kerbs. Saloon cars can run them, but single-seaters tend to just run close. The exit is very important in terms of lap time as the straight that follows begins with an uphill section.

KnickerbrookHeading downhill now, Knickerbrook requires firm braking as it’s tight and slow on entry. Once through the left-hand middle part there’s a pause before the track goes right and as this is the most cruicial section you should ensure you are on well over to the left. A dab of the brakes is likely to be required to get some weight over the front wheels before turning. This last part requires patience as the tightness makes it difficult to apply power and as there is a long run from here to Druids, aim to squeeze the throttle in one smooth movement.

DruidsThis corner is perhaps Oulton’s signature bend, being fast, technically difficult and despite a decent gravel trap has seen its fair share of big shunts. Again the approach is fast and therefore braking is firm but not so hard as to induce a heavy weight balance shift to the nose, you want the car as level as possible as you turn in. Ignore the first false apex and pick up the second. Once here start re-applying the throttle but be careful of the large bump right on the exit, particularly in the wet in a rear-wheel drive car as this is a common cause of spins. Also note that adding to the danger are the overhanging trees which can mean that this section of track is still wet when the rest has dried out.

LodgeThe completion of the track is a third gear corner that requires heavy braking over the undulations. Once you reach the apex you begin to drop downhill, which again can make throttle application difficult. Once through here you rush up over Deer Leap and begin another lap of this glorious parkland track