Damaged during the Second World War, Oulton Hall and surrounding parkland became a circuit in the early fifties 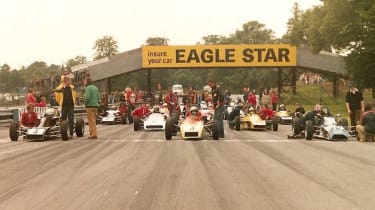 After being badly damaged in a WWII bombing raid Oulton Hall and the parkland became government property and in the early fifties a local motor club, the Mid-Cheshire Car Club, began using what was left of the original park roads as a circuit, with the first race taking place in 1953. The venue quickly established itself as real test for the drivers and many Formula One teams where attracted to the International Gold Cup race, which was won five times by Stirling Moss. It now hosts some of the biggest historic meetings of the year, along with BTCC events and an F3/British GT meeting, all of which draw large crowds.

Incidentally, legend has it the Knickerbrook corner was named after some demolition experts disturbed a courting couple whilst blowing up tree stumps. After the couple in question departed in something of a hurry an item of her underwear was discovered in a small brook close to where the track runs today.