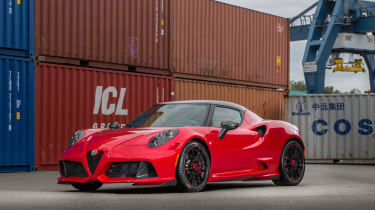 One area most people will probably agree the Alfa Romeo 4C isn’t lacking in is design. But that hasn’t stopped tuning house Zender from creating its own body kit to match an ECU remap it has created for the 4C’s 1.8-litre turbocharged four-cylinder engine.

The map boosts peak output to 271bhp and 295lb ft (up from 237bhp and 258lb ft), and, combined with the shedding of 15kg from the standard car’s 940kg kerb weight, helps to trim a claimed two-tenths from its 0 to 62mph sprint time. That brings it down to 4.3 seconds, giving the carbon-chassis Italian enough off-the-line grunt to match a V8 engined F-Type S convertible. 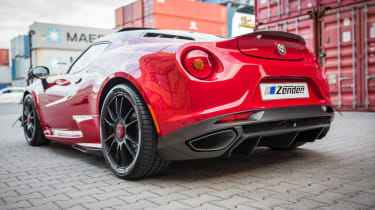 Unsurprisingly, the Zender 4C’s 165mph top speed can’t match the better-endowed Jag’s 186mph terminal velocity, but it does represent a 5mph increase over a standard 4C.

While performance gains will likely be universally welcomed, modifying an exterior that road test editor Dan Prosser proclaimed ‘has a presence that’s normally reserved for full-scale supercars’ (evo 209) could easily do more harm than good. 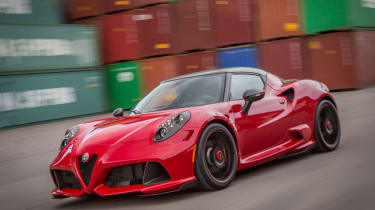 Thankfully, Zender’s additions are subtle, and come comprised of a new, more sharply angled carbon front bumper with flaps on either side, a more prominent carbon rear diffuser, side skirts – which house intakes for engine and transmission cooling – as well as carbon side mirrors, a carbon roof and light frames made from, you guessed it, carbon.

Similar changes are made to the car’s interior, which features black leather and Alcantara with contrasting stitching strewn over the seats, door cards and surrounding trim, as well as exposed carbon on the roof and larger carbon steering wheel-mounted paddles. 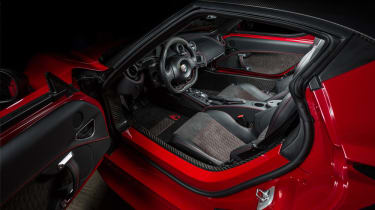 But while we’d say that the results are quite pleasing to the eye – the 4C’s overall demeanour remains but it’s now gained a dash of added exclusivity - the kit’s not for sale. Zender says that its 4C, which was originally unveiled at the Frankfurt motor show earlier this month, serves as a demonstration as to what it’s design and engineering departments can do. For this reason, there’s no word as to whether it will offer the parts as a package for sale.

Take a look through our gallery and let us know what you think in the comments below – should Zender put its 4C body kit into production?