The Alfa Romeo 4C was one of the most eagerly-awaited sports cars. Does it compete dynamically with Porsche and Lotus? 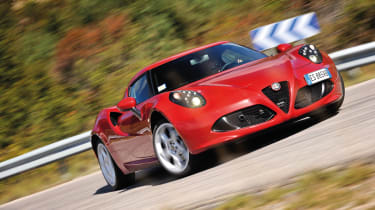 The Alfa Romeo 4C. The mid-engine, rear-drive sports car was unarguably one of the most eagerly awaited cars of 2013. It’s Alfa’s gamble of reinvention with a low-volume, high visibility sports car to create a halo around the brand, and provide a springboard from which to launch a new range of fresh mainstream models. It starts at £45,000, sticking it halfway between a Porsche Cayman and a Lotus Exige S. See it compete in our 2013 Car of the Year contest here.

The engine - Alfa’s familiar turbocharged, direct-injection 1742cc four-cylinder petrol motor - is some 22kg lighter than that found in the Giulietta, thanks to a new cast aluminium block in place of the regular cast iron item. Tuned to deliver a peak of 237bhp at 6000rpm and a fat 258lb ft of torque between 2200 and 4250rpm, it trades top-end effervescence for low and mid-range accessibility.

With the aid of Launch Control the Alfa 4C will punch from 0-60 in less than 4.5sec and hit a 160mph top speed. That’s serious performance from a sub-2-litre, sub-£50k sports car.

The Alfa 4C’s headline technology, though, is its carbonfibre tub, which not only adds lightness (it weighs a mere 52kg, contributing to a dry 895kg kerb weight) but also a sense of premium, hammered home when the door opens to reveal a bare gloss carbon-weave finish on the sills. Full Alfa 4C tech story here.

On looks alone I think we’re all agreed the 4C is a winner – you could park it up next to pretty much anything you care to name and it would hold its own. Swing open the door, drop into the interior and you can marvel at the wide weave of the carbon tub. It’s very reminiscent of getting into an early Elise (with the roof on), except all the naked aluminium has been replaced with naked carbonfibre. The controls are a mixed bag: the pedals look and feel great but the steering wheel is an awkward chunky thing and the paddles are flexible and cheap. However, even though it’s obvious where money has been saved, it still feels like a very special car… until you start the engine.

The 1742cc turbocharged four-cylinder just sounds out of place in the Alfa. It’s not that a four-cylinder is a bad idea per se, it’s just that when you first twist the key, this one sounds like it’s been lifted from a cheap ’80s hatchback. With 237bhp, the engine is at least effective and imbues the little Alfa with decent, if noticeably surging turbocharged pace in a straight line. Immersed in the process of threading the car down the road, you don’t really notice what sound it’s making, so it’s less of a problem. It’s undeniably characterful and effective, albeit in a rather hot hatchy manner that’s at odds with the 4C’s baby exotic brief and obvious class.

"It has a presence thats normally reserved for full-scale supercars." -Dan Prosser evo 209

The structure - famously made from carbonfibre - feels supremely rigid, which in turn allows the suspension the freedom to work unimpeded by unwanted flex. Consequently the damping has a wonderful feeling of control, pliancy and depth, rounding things off beautifully, but maintaining a feeling of tautness that’s essential in a car with such lofty sporting aspirations.

The 4C is swift and sure-footed, its lusty little engine punching us down the straights and snargling with every upshift. The healthy reserves of mid-range torque, coupled to the TCT transmission make for near-seamless surges of acceleration that soon see you travelling at three-figure speeds between the corners. The Brembo brakes - 305mm front and 292mm rear - are extremely powerful, with a lovely firm pedal and impressive, progressive response from the moment your foot covers the pedal.

And the 4C certainly has some pace through the corners: the alacrity of the direction changes make it obvious how light and stiff it is, while the levels of lateral grip it generates are huge. Sitting low in the tub, you feel right at the centre of the action, and as you lean ever harder onto its tyres you just start wishing the seats had some more support to hold you and your internal organs in place.

The only slip you’ll find in the dry is at the front, where the nose will just start to push wide. Even if you lift sharply at this point, there’s just the subtlest movement from its beautifully sculpted hips as the weight transfers rearwards, the light little engine not having enough mass to overcome the grip of the 20in rear wheels.

A lack of on-centre feel from its unassisted steering is the 4C’s main area of weakness. Once committed to a corner you find the balance is resolutely neutral, with an eventual fade into the mildest settling understeer. The 4C is more racecar-like than a Cayman in its focus on grip, stability and neutrality. Frustratingly that doesn’t quite translate into on-road dynamics that are as engaging or entertaining as they could be given a little more connection and freedom of expression.

When judged as a whole there’s no doubt the 4C is a quality item, though. Beautiful, and beautifully put together, it feels worth every penny of its £45,000 asking price. I suspect Alfa Romeo will sell all 3500 4Cs it hope to build annually based solely on its styling.

An optional Race Pack, which consists of larger wheels (18in front, 19in rear), stickier Pirelli P Zero tyres, a sports exhaust, thicker front anti-roll bar and another at the rear (as standard it comes without a rear anti-roll bar) and re-rated springs and dampers. This seems good value at £3000 and will surely prove popular, we weren’t given a standard car as context by which to judge the upgrades.

Perhaps the most talked about feature of the production 4C - its headlight clusters - have caused some concern for many of the original concept's appreciators. Since the 4C Spider was confirmed at the Geneva motor show, Alfa Romeo has agreed that it will offer more conventional light clusters for the 4C in future. 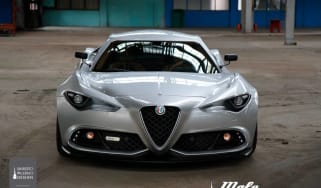 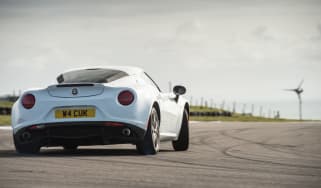 A proper sports car is 'not a choice', according to technical chief Fedeli, Alfa Romeo must have one
Alfa Romeo 4C Coupe and Spider review - it may look like a miniature supercar, but does it drive like one? 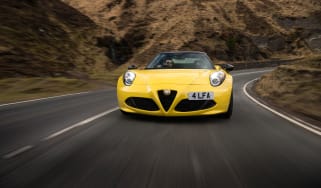 Alfa Romeo 4C Coupe and Spider review - it may look like a miniature supercar, but does it drive like one?

With a carbon fibre chassis, unassisted steering and those looks, how can the 4C fail to impress?
Alfa Romeo 4C Coupe and Spider review - it may look like a miniature supercar, but does it drive like one?

Alfa Romeo 4C Coupe and Spider review - it may look like a miniature supercar, but does it drive like one?

With a carbon fibre chassis, unassisted steering and those looks, how can the 4C fail to impress?
Alfa Romeo 4C by Zender – the prettiest 4C? 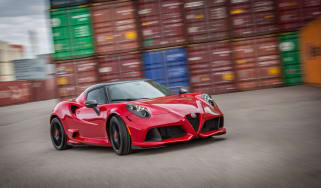