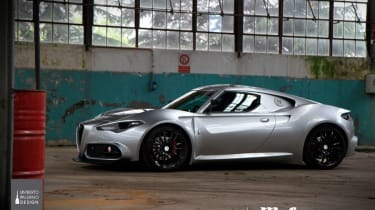 Like the idea of the Alfa Romeo 4C but prefer Alfa Romeo’s latest styling direction? Coachbuilder Mole Automobile and designer Umberto Palermo might have the solution with what they’re calling the Construzione Artigianale 001, a comprehensive rebody and retrim of Alfa’s mid-engined sports car.

While the car is still identifiable as a 4C, few original panels seem to have made the cut. Instead, in the oldest tradition of coachbuilding, the 001 keeps the original car’s form and structure but its bodywork is a significant departure, while the 4C’s spartan interior has undergone a luxurious transformation.

The most notable visual change is the adoption of a nose treatment not unlike that of the Alfa Romeo Giulia and Stelvio, featuring a taller and more upright “scudetto” grille than the regular car and horizontal headlights. It’s not a simple nose job though, as the lights are more a suggestion of the Giulia’s design than carried over wholesale - instead, the units themselves are small sculpted pods pushed to the edges of the car, with air otherwise passing through the rest of the headlight cutout and over the sculpted nose. 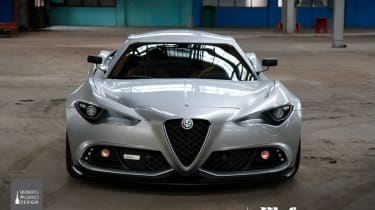 The front wings are significantly sharper than before and the car’s flanks are heavily reworked too, with a larger and more angular air passage to smaller vents on the rear wings than those of the mass-produced 4C. Extra vents have been incorporated ahead of a new engine cover (and behind large, monochrome Alfa badges), which is wider and longer than before and slatted, rather than incorporating a glass rear screen.

It’s all change at the back too, with a look not unlike that of some of the recent Zagato-bodied Aston Martins, with small, circular rear lights staring like glowing pupils from their narrow-eyed black housings. The rear panel is smoother and less sculpted than that of the 4C, which also means the Alfa Romeo badge is displayed more prominently. Four staggered tailpipes emerge from a redesigned rear diffuser element.

Inside the changes are equally striking, starting with a full black and tan leather retrim of the standard 4C’s slightly cheap-feeling cabin. Central air vents have migrated from pods atop the dashboard to a new home where the regular car keeps an aftermarket stereo which has the effect of de-cluttering the centre console, while the ventilation controls themselves are now milled from metal rather than presented in plastic. 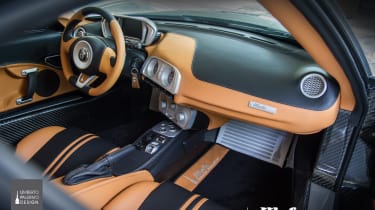 The Alfa’s digital display gets a matching metallic surround, while one of the standard 4C cabin’s low points - the hideous two-spoke steering wheel - has gained a third spoke and a black and tan retrim, which instantly improves the look. Pleasingly, the 4C’s carbonfibre chassis (in contrast to the steering wheel, one of the cabin’s high points) is still very much visible in the 001.

A matching luggage set - which almost certainly won’t actually fit in the 4C, given its paucity of cubbies and storage - has also been designed to match the car.

While the styling certainly won’t be to all tastes - we’re still unsure of several details ourselves - the 001 is for the moment a one-off. The car is making its debut today at the Salone dell’Auto di Torino, an open-air motor show in Parco Valentino, Turin - so we should hear further details on the car (including any changes to the 4C’s 1.75-litre turbocharged powertrain) soon.