Alfa Romeo has been threatening us with an SUV for many years now - remember 2003’s Kamal concept? - but now it’s finally upon us, in the evocatively-named Stelvio.

Naming an SUV after one of the world’s most famous driving roads is a bold move, but Alfa has managed to pull it off: Just like the Giulia saloon that shares the Stelvio’s newly-developed, lightweight platform, the Stelvio is a class act, and a car that can compete on level footing with increasingly tough German, British and Japanese competition.

> Read our full review of the Alfa Romeo Giulia

In fact, the Stelvio has the chops to beat several of its closest rivals, and that’s quite remarkable. It handles and rides well, steers with conviction and puts plenty of power under your right foot whichever engine you choose. When the 503bhp Quadrifoglio arrives you’ll get even more power and one of the quickest SUVs available from any manufacturer, but the talents of the regular models show the Stelvio isn’t just a one-trick pony. 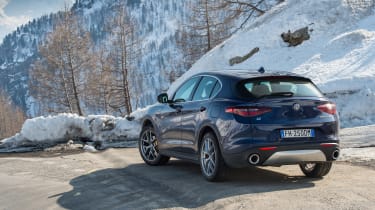 > Performance and 0-60mph time - Quick in all forms and when the Quadrifoglio arrives, obscenely rapid. Refinement lags behind some rivals, however.

> Engine and transmission - A choice of four-pot petrol and diesels and eventually, a 2.9-litre twin-turbo V6. An eight-speed auto is standard, optionally operated by gorgeous aluminium paddles.

> Ride and handling - Light weight and ultra-direct steering contribute to an agile chassis. At its best in Dynamic mode, which reduces steering assistance.

> MPG and running costs - Thanks to its dainty kerb weight, MPG figures are impressively high, even against German rivals.

> Interior and tech - Alfa’s cabins continue to improve; the Stelvio’s is much like the Giulia’s. Pleasing details, but slightly iffy quality in places.

> Design - Actually looks better in conventional trim than it does as the range-topping Quadrifoglio. Dynamic from some angles, awkward from others. 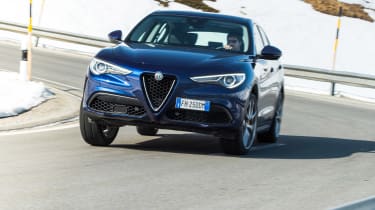 The Stelvio has been aggressively pitched into the premium SUV fold with a starting price around £4000 less than most rivals. At £33,990 for the entry-level RWD 178bhp 2.2-litre diesel, it undercuts rivals like the Volvo XC60 and Audi Q5 by a hefty margin. But the Alfa Romeo does so by severely cutting equipment levels, meaning these entry-level cars do without features like leather seats, satellite navigation or LED headlights. Move up to ‘Super’ trim level and standard equipment equalises, but then so do prices.

The Super trim level also grants you access to the full engine range, with the impressive 207bhp 2.2-litre diesel available for £38,490, putting it dead in line with the BMW X3 20d, Audi Q5 2.0TDI and Mercedes-Benz GLC220d. If you are after a petrol option, Alfa Romeo also offer two turbocharged units, one with 207bhp and the other with 276bhp, both are exclusively fitted with all-wheel drive.

> Click here for our review of the Audi Q5

Move up to Speciale trim and the equipment list grows further, including (lovely) 19-inch wheels, those swish gearshift paddles, full leather trim with heating functions in the seats and steering wheel. As the sort of defining features we expect from an Alfa Romeo, it’s a shame one needs to venture so far up the pricing ladder to get them, but the inconvenient truth is that at this level rivals easily feel more befit of their £43k+ list price.

Alfa Romeo is also launching a limited edition flagship model called the Milano Edizione, adding 20-inch wheels, an upgraded 10-speaker audio system, reverse camera and sports seats, pushing the price up and over £45k. Alfa Romeo has yet to give us pricing of the hot Stelvio Quadrifoglio, but even this will not have the market to itself as the AMG GLC63 and rumoured Audi RS Q5 and BMW X3M will keep the QV constantly looking over its shoulder.

The reality is that all offerings in this class are incredibly strong, with BMW, Audi and Volvo all at peak strength with new product and the luxurious Mercedes-Benz GLC still performing well in the class. 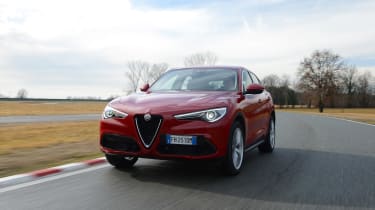 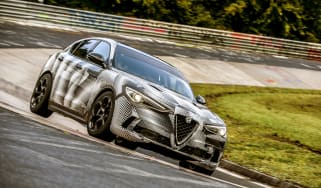 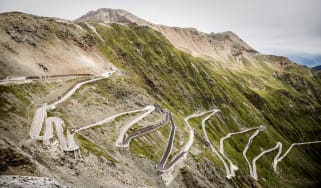 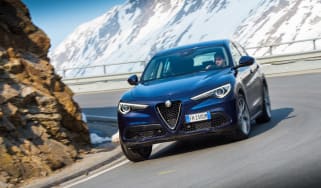 New Alfa Romeo Stelvio 2017 review – fun and capable, like no SUV should be

Alfa’s first SUV shares many of the attributes found in its talented saloon brother, the Giulia
Visit/alfa-romeo/stelvio/18534/alfa-romeo-stelvio-uk-prices-and-specs-revealed 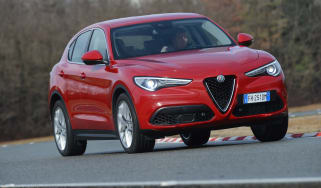 Alfa's first SUV will start from £33,990 for a RWD diesel model - but Quadrifoglio prices are yet to surface
Advertisement
Visit/alfa-romeo/stelvio/18726/alfa-romeo-stelvio-first-edition-order-books-open 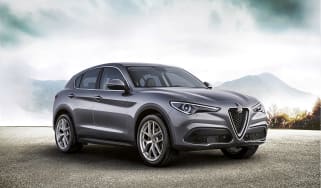 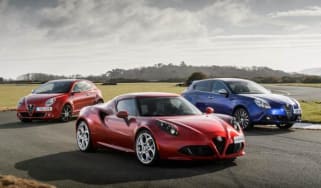 Alfa Romeo confirms Stelvio as SUV name - still due in 2017