A choice of four-pot petrol and diesels and eventually, a 2.9-litre twin-turbo V6. An eight-speed auto is standard, optionally operated by gorgeous aluminium paddles.

Initially the Stelvio is available with two engines. The first is a 2-litre, turbocharged four-cylinder petrol unit developing 276bhp at 5250rpm and 295lb ft of torque from 1750rpm, while the second - and likely a high-seller in Europe - displaces 2.2 litres, four cylinders and drinks diesel. This one makes 207bhp at 3750rpm and a brawny 347lb ft, also at 1750rpm.

An eight-speed torque converter automatic is the sole transmission available, just as it is on the Giulia whose Giorgio platform the Stelvio shares. Given the manual - at least in the Giulia Quadrifoglio application - isn’t one of the better examples of its type, this isn’t the loss it might be and even less of a loss on an SUV, though some may still pine for the extra interaction.

In reality, there’s still joy to be had clicking up and down the ratios via Alfa’s stunning aluminium gearshift paddles and shifts are quick and generally faithful, particularly in Dynamic mode. If we have a complaint, it’s that Alfa has engineered in a distinct thump with each gearchange when in Dynamic. This is presumably to enhance the feel of swapping cogs, but it just ends up being a bit irritating.. 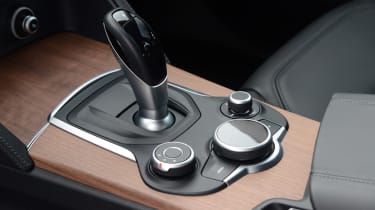 The engines themselves are effective, if not overly engaging. The diesel is smooth and quiet enough at low speeds and stirs the Stelvio along at a decent pace, and it undoubtedly suits an SUV’s typical usage profile. It doesn’t feel very “Alfa” though and gets a bit rough and noisy at higher revs. Better is the petrol. It’s far from being the smoothest unit we’ve tried (given the four-pot felt tight in the higher reaches, it may improve with miles) but the rorty engine and exhaust note is more becoming of an Alfa Romeo.

Of course, the one we’re waiting for is the Quadrifoglio. Like the Giulia, this will use a 2.9-litre, twin-turbocharged V6 closely related to the V8 used in the Ferrari California T. Performance in the Giulia is explosive and so it should be in the Stelvio; its 503bhp output at 6500rpm and 443lb ft at 2500rpm make it one of the most potent cars in its class.