Video and additional details of the new Alfa Romeo 4C sports car, which tackles the Porsche Cayman and Lotus Evora 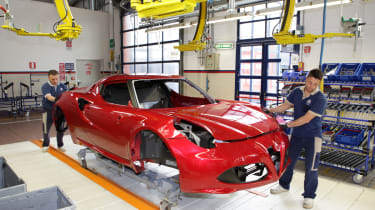 It's two years since Alfa Romeo unveiled its 4C concept car, announcing that it fully intended to put it into production. After a string of disappointments, most car enthusiasts had given up on Alfa ever getting its sporting mojo back, but with the unveiling of this incredibly pretty mid-engined coupe, there was suddenly hope again.

Fast forward two years Alfa has unveiled the production 4C. The firm seems to have kept to its word, because the 4C that will go on sale looks just as desirable as the concept. Well, almost. Somewhere along the way it lost the lovely 8C-like covered headlights of the concept and gained some cheap-looking sparkly units instead.

‘The number one goal with this project was to make the 4C as light as possible. This new design is much lighter than that on the concept, where the headlights were like those on the 8C. With no outside cover and no extra components underneath, the new ones are both lighter and cheaper to make. They still give the 4C its unique face, and those multiple running lights look menacing, like the lights on a jet fighter’, says Fiat’s global head of design, Lorenzo Ramaciotti.

‘We have in fact changed every inch of the car, but because the concept was very realistic in the first place, we didn’t have to modify the whole car, only surface details. The body panels are constructed from high-density plastic, which is a very good material when you are looking at a car with a planned production rate of only 3500 units a year. The plastic can be tuned so that it features different thicknesses and strengths wherever necessary. The only metal structures on the 4C are the front and rear aluminium crash frames and the doors, which have metal frames inside them for crash strength and for the hinges to be fixed to.’

Another surprise is that the front ‘bonnet’ is fixed. It looks like it opens conventionally, but it can only be removed by getting your spanners out. It comes down to Alfa simplifying it to reduce weight, and a fixed panel means no hinges or opening mechanism are required (topping up the screenwash is done via a removable panel between the bonnet and windscreen).

The Alfa 4C’s technology centres around a carbonfibre tub, which not only adds lightness (it weighs a mere 52kg) but also a sense of premium. That’s reinforced when you open a door and reveal the bare gloss carbon-weave finish on the sills, just as you’d find on a Pagani Zonda. It looks stunning, with the super-size weave continuing on the floor (fixed mats protect the carbon under your feet), part-way up the centre tunnel, inside the door jams and halfway up the rear bulkhead behind the seats.

A video of an Alfa Romeo 4C being made
‘We believe the 4C has no direct competitors at this price point,’ says of Louis-Carl Vignon, who oversees Alfa in the Europe, Middle East and Africa regions. ‘Before the 4C, if you wanted a sports car with a carbon chassis you had to buy a McLaren or Ferrari supercar, so the 4C introduces race technology to a new market. Compared to cars like the Lotus Elise, the 4C is much more useable but still very extreme. It is a pure driving experience: there is no power steering because that is the best solution for driving pleasure. The speed of gearchange is very quick too and we have put the paddles on the steering wheel, so you never have to take your hand off the wheel.’ Those paddles control a twin-clutch gearbox mated to the 237bhp 1.7-litre turbocharged in-line four-cylinder that’s mounted transversely behind the cabin.

Will this be enough for sales to hit Alfa’s ambitious target of 3500 units a year? £52,000 is more than we hoped the 4C would cost. Even if the regular version comes in close to £43k, it still feels like a big chunk of money for what is a fun car rather than an everyday sports coupe. Are people prepared to pay a premium to own a car with a trick carbon tub? We’ll find out in due course, although Vignon isn’t worried: ‘In terms of customers, the 4C is going to sell to car collectors, to lovers of Alfas and most important of all, to lovers of cars.’ Best count us in, then.