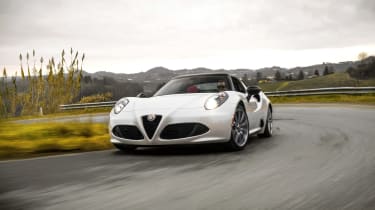 The Alfa Romeo 4C had a tough introduction to market, it must be said. Heralded as a return of the small, lightweight and relatively affordable sports car, with stunning supercar-in-minature styling underpinned by a carbonfibre-tub chassis and clever powertrain it was everything the enthusiast wanted. It went so far as to be compared to the Lotus Elise, with assistance-free steering and a sub-1000kg kerb weight, but oh how it went so incredibly wrong.

The original 4C coupe, despite all the right ingredients, was so poorly executed that it couldn't hope but be ripped to pieces by both the motoring media and prospective buyers alike. The Spider was Alfa's rebuttal, a heavily revised update that not only partially removed the roof, but also fix the issues many felt made the coupe so disappointing. 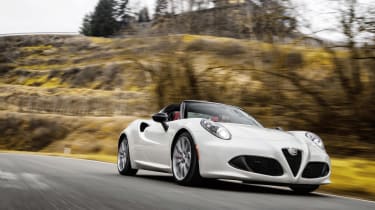 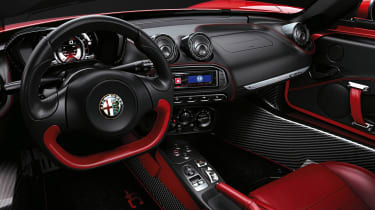 Early signs are positive that the Alfa Romeo 4C Spider is an improvement over the less than impressive 4C Coupe we’ve reviewed previously. Detail changes to the steering and suspension and a change in weight distribution mean that, in standard specification at least, the Spider experience is lighter, less corrupted and more flowing than its coupe equivalent.

It’s still not perfect however, becoming unsettled as the road becomes cambered or the surface broken and vexing with its tardy, boosty throttle response and slow reactions to tugs on the gearshift paddles. The parpy exhaust note is entertaining in moderation, if not as cultured as those of six-cylinder rivals from Porsche (Boxster Spyder) and Lotus (Exige Sport 350), and the styling will always be a highlight.

The Spider’s extra cost over the coupe might deter you, but it’s so far the best version of the 4C we’ve tried. It's just a pity it's not even better. 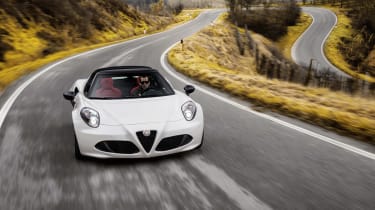 Avoid the Racing chassis option. For a start, eschewing the upgraded suspension, rear anti-roll bar and uprated front anti-roll bar will save you £1250 (more if you also go without the £1050 racing tyres and £1350 larger alloy wheels), but it’ll also make the 4C just a little more fluid on twisty roads. You might lack the driveway kudos of the 18in front and 19in rear alloys (the standard wheels are 17in up front and 18in at the back), but it helps you work with the chassis a little more and doesn’t punish as harshly on rougher surfaces.

‘The 4C is busy across the road. It finds cambers and ruts that just don’t trouble its rivals, so the unassisted steering tugs this way and that. There’s a responsiveness and a very real sense of rigidity in the tub, but the damping doesn’t allow the car to breathe with the road surface. You find yourself tensing up to keep the car pointing straight, fighting the chunky steering to get it turned in and trying to guess if it’ll oversteer or push on.’ – Dan Prosser, Road test editor (4C Coupe, evo 209) 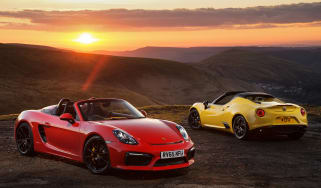 The 981 Boxster Spyder is one of our favourite sports cars, but Alfa Romeo's 4C spider is a tough car to resist. Or is it?
Visit/audi/sq7/alfa-romeo-4c-spider-v-porsche-boxster-spyder-spider-decider

The 981 Boxster Spyder is one of our favourite sports cars, but Alfa Romeo's 4C spider is a tough car to resist. Or is it?
Visit/alfa-romeo/4c-spider/17211/alfa-romeo-to-launch-4c-spider-celebrating-original-duetto 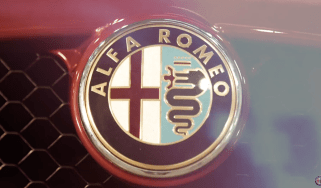