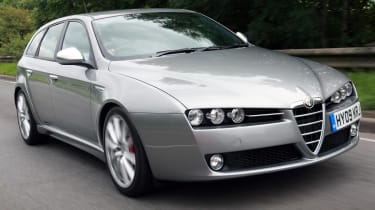 First there was the four-stroke petrol engine, devised by Niklaus Otto. That's why the four-stroke system is known as the Otto cycle. Then men called Miller and Atkinson developed variations involving keeping valves open when formerly they were closed, and vice-versa. The Miller cycle needs a supercharger to compensate for a lack of intake suction. The Atkinson cycle, favoured by Toyota for the high-economy but not very responsive engine of the Prius hybrid, is designed for low emissions and to get the exhaust catalyst working quickly. Still with me? Then try this further variation on conventional wisdom from Alfa Romeo. It's a new 1742cc engine able to produce not only 197bhp but also 236lb ft of torque, the latter arriving at just 1400rpm. Such is this new engine's torque spread that it can accelerate an Alfa Spider from 43.5mph to 75mph, in sixth gear, in 11.8 seconds instead of the yawning 16.6 seconds taken by the 3.2-litre V6 version. Yet its official CO2 is 189g/km compared the V6's 262g/km, and the 0-62mph time is only slightly tardier at 7.8 rather than 7.2 seconds. Looks like the V6, sonorous as it is, might be on borrowed time as the motor industry's latest example of intelligent downsizing breaks cover. So what's the secret? It involves having a lot of valve-timing overlap – inlet and exhaust valves open together – between 1000 and 1800 rpm. This gives a direct path through the cylinder for the intake air, already compressed by the turbocharger, to add further airflow energy via the exhaust valve to the turbocharger's exhaust-driven turbine. The amount of escaping high-pressure air is quite small (it increases the total air draw by about 30 per cent) but it's enough dramatically to reduce turbo lag. That's the scavenging bit – using the momentum of airflow to get the most air through the engine – but there's more. This being a direct-injection engine, fuel is injected only when and where it needs to burn which means, during this low-speed scavenging process, not on the inlet stroke. But just after the power stroke is completed and the hot exhaust gases are being expelled, another little squirt of fuel combines with the remaining oxygen and causes the gases to expand further in the exhaust manifold. This, of course, drives the turbo with yet more energy. The key to all this is very close, and greatly variable, control of valve timing (on both camshafts), injection timing and ignition timing. The overlap progressively reduces up to 2000rpm, by which time the engine is behaving more like a regular, albeit still very torquey, turbo having suffered minimal lag up to that point. Does it work? I drove both a Brera and a heavier Spider with the new engine, and the pull from low revs was mighty impressive. It's not a sporting-feeling engine, which is unfortunate given the badge its cars wear, because the initial throttle response is quite soft and the power is fading fast by 6000rpm, but it's a muscular and effortless one which subjectively makes these weighty cars feel rather more eager than they do when powered by the V6, never mind the lacklustre 2.2. Clearly the new engine makes Alfa's normally aspirated 2.2-litre four-cylinder engine redundant, and the 1750 (so named in honour of past Alfa 1750s old and ancient) will gradually replace the bigger four-pot. The 159 gets the new engine first for the UK market, with prices slightly higher than for the now-obsolescent 2.2, with the Brera and Spider following later in the year.