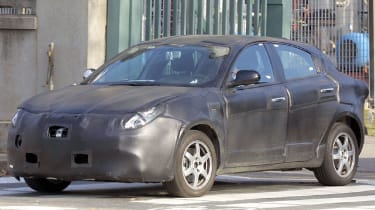 The Alfa Romeo Milano hatchback has been spied out testing. It’s the replacement for the 147, and while it had been expected to get the 149 nametag, Alfa is now set to revive some names of old for its model lines – Giulia is set to make a comeback on the 159 replacement, too.

The 4.3-metre long Milano is close in size to the Alfa 156, but is based on the current Fiat Bravo platform. It means the Milano is likely to straddle sectors, possibly to help differentiate it from its stablemates - the Bravo and Lancia Delta – and distance it from the Mini-sized Mito.

A range of 1.4 and 1.6-litre engines are expected to be offered, some of them utilising turbocharging to offer hot hatch pace with half-decent economy. There’s talk of a V6 for a fiery GTA version, but with the Mito GTA boasting a turboed 1.7 (and a more than adequate 240bhp), a larger six-cylinder engine could well fall out of favour.

It could be part of Alfa Romeo’s return to the US as well, featuring as part of the plans of the affiliation with Chrysler. That could also lead to a rear-wheel drive incarnation of the Alfa 166, which will platform-share with the new Chrysler 300C. That all hinges, of course, on the future of both companies and where they stand on the other side of the economic crisis. Fingers crossed…