Price, specs and release date for the Alfa Romeo 4C plus a new track test video 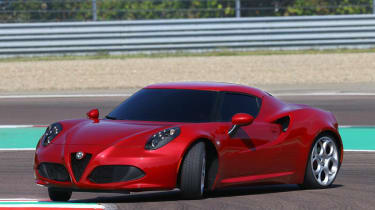 Alfa Romeo has confirmed final price and spec details of its 4C sports car. The mid-engine, rear-drive coupe has been in development for some time, and it marks a return to sporty Alfas with its current range consisting of only front-drive hatchbacks.

To mark the car’s launch, Alfa Romeo has released a video with F1 race winner and Ferrari driver Giancarlo Fisichella at the wheel of the 4C. To show potential buyers that this car is more than ‘just a pretty face’, Fisichella wrings the neck of the baby Alfa sports car around the Fiat group’s Balocco test track in Italy.

This car, the smaller sibling to the gorgeous 8C, is properly fast. The 4C weighs just 895kg (dry), its 236bhp turbocharged 1750cc engine enabling 0-60 in less than 4.5sec and a 160mph top speed. This lightweight construction has been achieved largely thanks to its carbonfibre tub, along with several other key areas of weight saving including the use of an aluminium engine block. The gearbox meanwhile, is Alfa's TCT twin-clutch paddleshift transmission. Like its bigger 8C sibling, there is no manual option.

And as Fisichella demonstrates, the lack of weight coupled with a very short wheelbase means the 4C is incredibly nimble. But with the mighty Porsche Cayman as its main rival (and cheaper, too), it will have a tough job of gaining the title of best handling car in class.

Despite his probable bias in this video (Fisichella is employed by Alfa’s parent company of course), his ability is proven, with 229 Formula 1 starts and three wins in his Grand Prix career, which spanned 1996 and 2009. He is the now the current FIA World Endurance Champion in the Le Mans GTE Pro class.

Here he is playing with the Alfa Romeo 4C at Balocco. Thankfully the heavy rock music does eventually fade, allowing those lovely exhaust notes to wail through…