Alfa's new small hatchback will be called Mi.To, not Junior 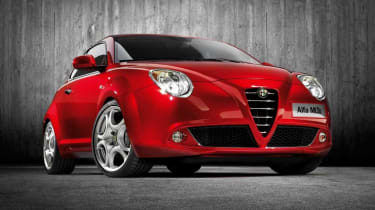 Confused already? Alfa Romeo's new small hatchback, based on Fiat Grande Punto underpinnings and known internally as Project 955, isn't going to be called Junior after all. Its name is the Alfa Mi.To, a reference to the marque's history in Milan (Italian abbreviation Mi) and the new car's production in Turin (To, as in Torino).   Scheduled for launch in June, with UK sales starting next January, the Mi.To begins with a 155bhp version of Fiat's 1.4-litre turbo engine as also seen in the Abarth Grande Punto, plus a six-speed gearbox and a new three-mode 'DNA' (Dynamic, Normal and All-weather) traction and stability system. This will include the TTC (Torque Transfer Control) already revealed on the new Lancia Delta, which gently brakes the inside front wheel as required to reduce understeer under power.   There are elements of the 8C Competizione in the Mi.To's design, such as the frameless door windows, the shape of the front air intakes and the round LED tail-lights. The interior is also appropriate for an Alfa and considerably different from a Grande Punto's cabin.   Future engines will begin at 90bhp and include diesels, and there are plans for power greater than the initial 155bhp – the 180bhp of the Abarth Grande Punto EsseEsse, maybe? As for safety, Alfa is aiming with the Mi.To to be one of the first carmakers to launch a car with the new 6-star EuroNCAP score.