Alfa's Mi.To was put through its paces recently at the 'Ring 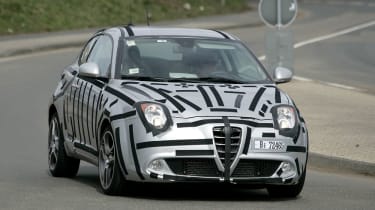 Scheduled to hit the dealers in autumn this year, the two-door hatchback is designed to be a serious competitor to the Mini  and the up-coming Audi A1. Partly based on the Fiat Punto, we reckon the Alfa Mi.To will be the more attractive and exciting car which also explains Turin’s plan to employ the higher-level engines of the Punto-range with outputs between 120 and 227 bhp plus powerful diesel units.

Being considerably shorter than the new Alfa 149, the new Mi.To could become an excitingly sporty hatch for the city. Its name, by the way, refers to the shortcuts of Alfa’s two hometowns, formerly found on registration plates used in Italy until the 1990’s: Mi refers to the city of Milan and To stands for Torino (Turin in English).