The distinctive looking Spider was nothing like its predecessors when it launched in 1995, and we still haven't seen anything like it since 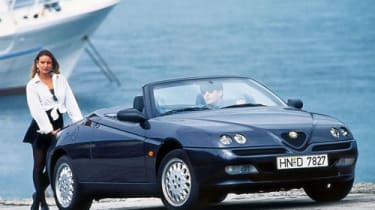 Few car names evoke such romantic, idyllic thoughts as Alfa Romeo Spider, but sadly it’s not a nameplate that has traditionally stood for sharp handling, engaging dynamics and blistering performance.

Keen drivers will have been disappointed by many of the little (and usually red) Italian roadsters to bear the Alfa Spider name but one of the cars does stand out, the 1995 iteration launched in tandem with its GTV coupe sister car. This is a Spider that displays some of the passion on which the Alfa Romeo brand is built and it's both readily available and reasonably affordable for car fans seeking a budget roadster that's a little out of the ordinary.

The Spider name was first used on an Alfa in the 1955 when the convertible version of the Giulietta arrived. The 50s Spider has now become an enjoyable little classic and well known for its role in the film, The Day of the Jackal. Its successor, also famous for its appearance on the silver screen in The Graduate, is achingly pretty and blessed with a delightful, punchy engine but its hard top equivalent, the GT, was always the better steer.

That didn’t stop the second generation Spider, the 105-series, remaining on sale for almost 30 years. In its lifetime its bumpers grew into rubber carbuncles so that it would conform to safety regulations but that meant it certainly didn’t grow old gracefully.

In 1995 Alfa launched the all-new next generation Spider and, for the first time, this version was front-wheel drive. Just like the 105 it replaced, this 916-series Spider always played second fiddle to its coupe alternative, the GTV, when it came to driving enjoyment. Even so, this Spider with its balanced chassis and super fast steering (only two-and-a-bit turns from lock-to-lock) has real poise and is the most enjoyable of the lot, including the later Brera based Spider launched in 2006. 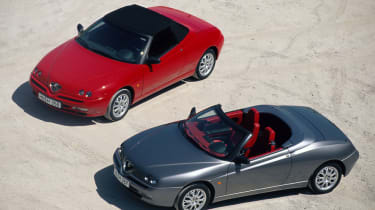 Most of the 916 Spider’s excitement comes from the drivetrain. Initially, the 90s Spider was only available with a 150bhp 2-litre four-cylinder twin-spark engine. It isn’t the same all-aluminium motor used in the older 75 saloon, instead Alfa developed a new cylinder head for a cast-iron Fiat block.

The idea might not have appealed to die-hard Alfa Romeo fans, but with 16 valves and variable cam timing it produced good and, mostly, reliable performance. Oil pumps have been known to fail on higher mileage examples, which causes oil starvation to parts of the engine even when full of oil. Cam belts have also been known to fail earlier than expected, too – the recommended mileage for one to be changed is 72,000 miles but they have been known to break around the 53,000 mile mark.

In 2001 a 220bhp 3-litre V6 made its way into the front of the little Italian convertible – many years after it was available in the GTV coupe. This is the famous 24-valve ‘Busso’ V6, named after its designer Giuseppe Busso, that has been touted as one of the greatest engines ever to work its way into a production car. Not only does it make a glorious noise, but with polished intake tracts it looks spectacular too. 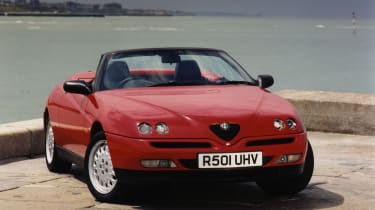 The Spider, just like the GTV, has MacPherson strut front suspension while the rear has a multi-link set-up – bushes in the rear axle allow the rear wheels to steer the opposite way to the front to increase agility. The chassis, if well maintained, is durable; any serious problems will be audible from behind the wheel.

More memorable than the way the Spider drives is the way it looks. After the long running Bertone 105 series Spider, Alfa returned to Pininfarina, who styled the original Giulietta Spider, to design both the 916 series Spider and GTV.

Its wedge shape profile makes it look distinctive, while its heart shaped grille means it’s recognisably an Alfa Romeo. After an inevitable stint where it looked decidedly naff, all radical designs go through a similar phase, the Spider has matured into a very pretty car. But, yet again, the hard-top trumps the Spider as it is almost universally considered the better looking car.

Both the Spider and the GTV were given a facelift in 2003. The newer car’s smoother edges and bigger grille certainly modernised the way it looked, but the original is prettier. 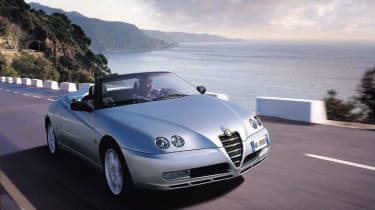 The interior isn’t as adventurous looking as the exterior, but sadly this more functional look hasn’t translated into a particularly practical, quality feel. Its controls aren’t laid out in the most logical and ergonomic fashion – however, the pedals are well spaced and perfect for heel-and-toe down changes – and it’s not screwed together with the same meticulous precision as its German rivals of the time.

The soft-top roof is prone to letting water in, especially towards the outside where the roof meets the screen. The Spider’s interior does suffer when it gets damp and can start to look very tatty. One thing that should also be mentioned is that boot is tiny, only really big enough for a soft sports bag.

The 916 was launched during a golden age for coupes, almost every manufacturer made a sporty two-door – it was the SUV crossover of the 1990s. That meant the GTV has a plethora of rivals: the Ford Puma, Honda Integra, Fiat Coupe, Nissan 200SX, VW Corrado, BMW 3-series. The list goes on.

Alternatives to the Spider are rare, though, mostly because the successful Mazda MX-5 dominated the small convertibles market. The Japanese drop-top can’t match the Alfa’s engines, but its rear-wheel drive chassis offers up a different and arguably more fun drive. Masses of aftermarket tuning options for the MX-5 make it easily tailored to your liking, too.

> Read our review of the latest Mazda MX-5

If you’re desperate for something Italian, there’s always the Fiat Barchetta. Again, its engine isn’t anywhere near as remarkable as the Alfa’s but its eager chassis makes it a fun little car to drive.