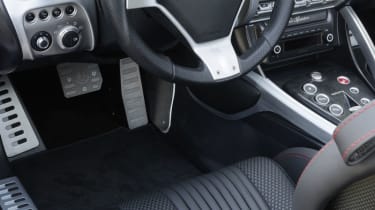 I’ll start in the middle, because it’s probably the bit you want to hear most. I’m afraid you’ll have to imagine the hearing part, but I’ll do my best.

The venue, as for many an Alfa Romeo, Maserati and Fiat introduction, is the Balocco test track between Milan and Turin, built originally by Alfa to test its Grand Prix cars. The course we’re using contains corners replicated from various famous racetracks, and as no new Alfa Romeo 8C Spiders are yet registered for the road, it will have to do.

There’s a short straight before the replica (and unauthentically bumpless) Monza banking, over which runs another, wide piece of track so it forms a short tunnel. The 8C’s fabric, Z-folding, manually released but powered roof is down, of course. Out of a very tight left-hander we erupt, tail threatening to overtake nose as torque overwhelms grip. It’s one squirtable car, but catchable too without demanding the reflexes of a Vettel. Upshift with a pull on the right-hand paddle (they’re fixed, like a Maserati’s, for obvious gene-sharing reasons), upshift again.

Here’s the tunnel. A manic, explosive, dirty howl bounces off the walls, like the sound of a flat-crank Ferrari V8 with four of the exhaust-manifold branches tuned to an unfamiliar length. Throttle shut for another upshift, hear an aural firework display of crackles and bangs shooting from the four tailpipes before the howl is reinstated at a slightly lower pitch. This is effectively Maserati’s 4.7-litre V8 (Ferrari-based block, 90deg crank throws, dry sump in this spec, built at Maranello) but with extra power (450bhp) and a mad soundtrack to match. The 8C makes a GranTurismo S sound almost demure.

Alfa’s 8C Competizione coupé did all this, too, but you get to hear more detail and decibels when the roof has gone missing. But even a soundtrack such as this wears thin unless the rest of the car can live up to it. We’ve heaped praise on the Competizione, chiefly on its looks, the sound (obviously) and its essentially naughty streak, but it has plenty of rough dynamic edges: the ride is unyielding, the steering is sudden and the oversteer is the same. The finer points of sophistication were not taken seriously.

Something rather different is going on here. The Spider is to be no less rare than the Competizione, with 500 of each eventually either reaching the road or becoming incarcerated in collections. The last Competizione (unless Alfa goes ahead with an even-more-limited-edition, extra-light, extra-potent GTA version for its centenary next year), was delivered in January this year, while 1200 hopefuls put their names down for the Spider after its Geneva 2008 debut. Seven hundred have been disappointed; of the remainder, 35 are in the UK, undeterred by the price (a heady £174,000, with left-hand drive compulsory).

So, given the pent-up demand, Alfa Romeo didn’t have to hone the Spider to perfection. Beauty, blood and thunder should suffice again. But there’s a reputation to build, and Alfa Romeo wants the 8C to be considered a properly serious, developed supercar. Result? This time, the engineers have finished the job.

The chief one, Domenico Bagnasco, explains what has been done, starting with the need to compensate for the removal of a rigid carbonfibre roof. Crossbraces now link the suspension towers, front and rear, and longitudinal braces behind the sills tie the front and rear subframes together. That makes a structure twice as stiff as that of the Brera-based Spider (hardly a difficult achievement), even if it can’t match the stiffness of the Competizione, which Bagnasco describes as ‘off the scale’.

Now, here’s the really interesting bit. Echoing what Aston Martin did when creating the V8 Vantage Roadster (an obvious 8C Spider rival, come to think if it, and suddenly representing surprising value), Bagnasco has made the springs stiffer than the Competizione’s. The extra weight – 90 evenly distributed kilograms, which would have been more had the Spider not adopted carbon-ceramic brakes – is partly why, but with the higher-rate springs go dampers softer on bump but unchanged on rebound. The front anti-roll bar is thicker, too.

Electronic witchcraft is avoided. The dampers are conventional passive items, the steering has conventional hydraulic assistance. ‘We want to make communication more transparent between asphalt and driver,’ says Bagnasco, ‘and to guarantee more feeling in the steering.’ Sensory purity, uncorrupted by clever-clogs digital delusion. We like that.

As with some Maseratis whose platform, suitably shortened, the 8C uses, the engine and the rear-mounted transaxle are linked by a rigid tube. It keeps the driveline tight and the masses anchored down. Inside, there’s some familiar Maserati switchgear for the transmission, but the naked, satin-finish carbonfibre dashboard and the lushly leather-clad, carbonfibre-shelled seats are pure 8C. So is the hefty chunk of aluminium in the centre console, a solid cast ingot machined to accommodate vents and switches, then brushed and anodised.

From the outside, the 8C’s perfect curves make a Maserati GranTurismo seem bloatedly extravagant. It’s hard to think of a current car more perfectly, classically but not retrogressively shaped, and removing the roof has done the beauty no damage at all. Beauty is hard to find in the modern, brutalist auto-world, but we’ve found it here.Part of the 8C’s muscular presence comes from its truncated tail and the way it wraps around the rear wheels. The tail’s brevity suggests a meagre boot, but opening the lid reveals even less of one. At least you can supplement the compact tailored cases with wardrobe bags to hang behind the seats. You also have to find space in the boot for a bag containing two triangular pieces of plastic that cover the space between the hood and the body sides when the roof is open.

I was talking about finishing the job. The proof comes on the track, where the first surprise is the Spider’s relative suppleness. This in turn makes its handling more progressive and predictable than the Competizione’s, its steering more subtly talkative – even to the extent of weighting up under big cornering forces like steering used to do before power assistance became so invasive.

So as you squirt the Spider from bend to straight to bend, as you pile into the left-right Tarzan corner (Zandvoort, that one) that dives under another bridge, you feel elated but not intimidated. The 8C is very quick – 4.5sec to 62mph – especially when the engine is in its post-4000rpm howl-zone, but it’s friendly. The gearbox works smoothly enough in auto mode if it must, and shifts quickly but never violently in the sport manual mode, which is the Spider’s natural territory. Sport loosens the tail a bit but on track you want more, so you switch off the VDC and tyre smoke is yours for the asking.

My only worry concerns the brakes. Hurtling towards the end of one meaningful straight, Bagnasco urged me not to brake until the 100-metre board. So I didn’t. As the pedal sank against high-density sponge, I thought we might crash. We didn’t. Gave me a fright, though. For a few seconds I was fresh out of adrenalin. And you need plenty of that for the 8C Spider.