Priced from £89k, the new Alpina B5 Bi-Turbo is the most inexpensive way into a 200mph car 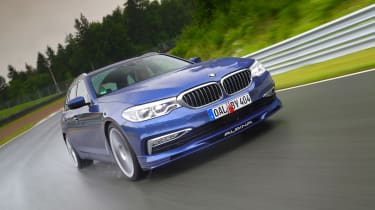 Alpina has just released UK pricing for its new 5-series based B5 Bi-Turbo, it starts at £89,000 for the Saloon and £91,000 for the Touring. At those price points, the B5 Bi-Turbo Saloon is the least expensive way into a new 200mph car and the Touring the fastest estate car currently on sale. How's that for a couple of claims to fame?

Alpina has been tinkering with the mid-sized BMW 5-series since 1978 and back in 1989 when it launched the B10 Bi-Turbo it was, at the time, the world’s fastest production saloon. Nowadays, it positions the all-new G30-based B5 as the quintessential sports saloon (or estate) for those who think the BMW M5 and Audi RS6 are a little unsubtle. 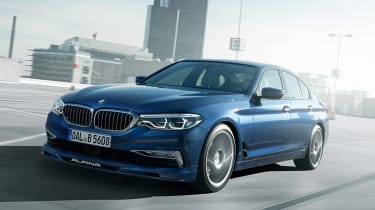 Based on the new generation G30 5-series, the B5 has inherited some impressive new foundations. At over 100kg lighter than the previous F10 generation 5-series the new B5 benefits from the same weight reduction as in standard 5-series models.

The B5 builds on the basic 5-series’ new chassis with upgrades to the suspension, utilising a softer set up than is employed in the M5. For the first time, the B5 will also incorperate Integral Active Steering, BMW’s own rear-wheel steering setup that, like most others systems, helps ‘virtually’ shorten the wheelbase by steering the rear wheels in the opposite direction to the front wheels at low speeds. At higher speeds the rear wheels turn in conjunction with the fronts giving the car greater stability – useful for a saloon and estate capable of over 200mph. 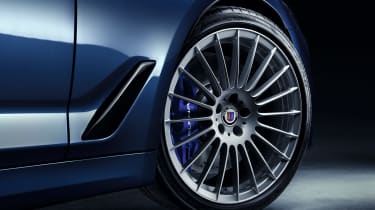 Thanks to the sustained weight loss and an upgrade in power, the B5 Bi-Turbo will now break the double tonne. Under the bonnet sits a familiar 4.4-litre V8 twin turbo, although not the S63B44TU M Power unit found in the M5, but the N63TU2 used in the softer M550i instead. That has not seemed to have had much effect on the ability of Alpina to impress us with raw figures though, with a whisker under 600bhp and 590lb ft of torque available.

This significant power output is then transferred to the road via a ubiquitous ZF eight-speed automatic gearbox and, crucially for the UK, all-wheel drive. The option of all-wheel drive has always been a forbidden pleasure in the UK thanks to the previous F10’s inability to combine the all-wheel drive system and right-hand drive.

Alpina B5 Bi-Turbo: anything else?

Aside from these sweeping mechanical changes, Alpina has deftly applied its usual aesthetic modifications, including a re-profiled front splitter, rear valance, rear lip spoiler and a set of lovely needle-spoke 20-inch wheels. The Alpina looks most intriguing when without the needlessly large rear badging, but I’m sure no one here would judge if you ticked the classic Alpina stripe package.

As the alternative M5, the B5 has always found a niche outside of traditional M Division deliverables. The availability of an estate body only widens this appeal, but in the wake of the M5’s continued creep towards the mainstream, the new B5 Bi-Turbo will either appear a model aligned too close for comfort, or show up the M Division at its own game. We will have to wait and see which institution comes out on top.