Offering M5 levels of performance, this Touring version of the Alpina B5 BiTurbo makes a great family-friendly performance car. 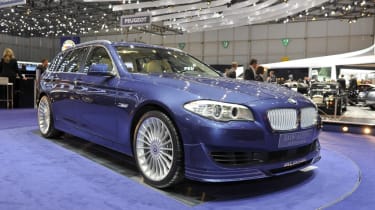 Following on from the recently launched saloon version, Alpina is using the Geneva Motorshow to launch the B5 BiTurbo Touring. Utilising the same 507bhp twin-turbocharged version of BMW’s V8 and eight-speed automatic gearbox as the saloon, expect performance very similar to the four-door (which hits 60mph in 4.7 seconds and on to a derestricted top speed of 191mph). C02 and fuel consumption figures are also unlikely to change significantly from the saloon’s 26.2mpg and 252 g/km

Externally, the modifications to the BiTurbo Touring are as subtle as you would expect from Alpina. It features the company’s trademark twenty-spoke alloy wheels and some discreet bodywork changes such as new side skirts and an Alpina-branded front bumper.

There is no word yet on a release date for the B5 BiTurbo Touring but expect it to cost more than the four-door’s £69,995 when it reaches British shores. See the rest of evo’s 2011 Geneva motor show news