We drive Alpina's ultra-exclusive 591bhp take on the 5-series 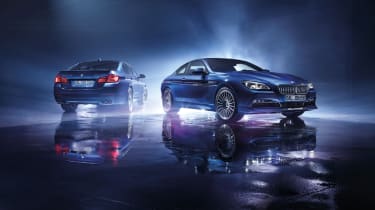 Celebrating Alpina’s 50 years in business, this B5 is limited to 50 units worldwide. Just two have been allocated to the UK, and they’re both already spoken for. Along with an equal number of Edition 50 B6s, this Popeye-like 5-Series is the most powerful Alpina ever to originate in the small Bavarian town of Buchloe. Like other Alpinas, it’s built on the regular BMW production line and covered by the full BMW warranty.

At the heart of the Edition 50 is a upgraded version of the 4.4-litre Bi-Turbo V8. It now produces 591bhp at 6,000rpm (up from 532bhp in the regular B5) and 590lb ft at 3,500rpm (up from 541lb ft) thanks to various modifications under that heavily contoured bonnet. A revised air intake and increased fuel pressure allow more boost, and there’re also alterations inside the turbocharger housings.

The Edition 50s also have new forged 20-inch wheels that save a total of 15.6kg per car over the more traditional Alpina multi-spokes, an optional Brembo brake upgrade with four-pot calipers and 395mm discs, and a titanium exhaust from Akrapovic that saves 17kg. Nevertheless, these are still weighty machines, the saloon just short of two tons, the Touring just over that figure. 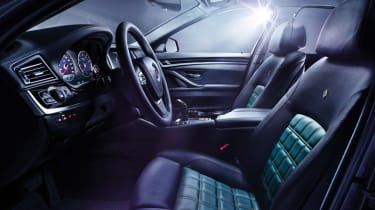 Don’t for one moment view that mass as an inhibitor to this car’s performance. Uncorking the Edition 50 for the first time is a genuine jaw-to-footwell carpet interface moment – all the more so because by adhering to Alpina’s ‘performance with luxury’ mantra, up until that time the B5 is surprisingly demure. Leaving the car in Comfort keeps the exhaust quiet and the suspension pliant. Given Alpina hooks up the V8 to ZF’s much-admired eight-speed torque converter, it’s possible to glide around in a laid back fashion. As ever with Alpina, tiny buttons behind the steering wheel spokes are the manual override for gear changing, along with the usual BMW gear lever.

Under full throttle in second gear the ‘50’ rampages forward. In fact, so violent is the acceleration there’s the sense that it’s almost overwhelming the rear axle, the car perceptibly wriggling with yaw up the road. The way it goes from 60mph to 120mph is frankly comical: the manner in which it gets up to 180mph is downright absurd. That’s the speed we logged before traffic demanded prudence, but the ‘50’ felt as though it was well on the way to its staggering 204mph top speed. For Autobahn regulars that’s part of the appeal with an Alpina: the cars have no limiter, and are tested to their very maximum. 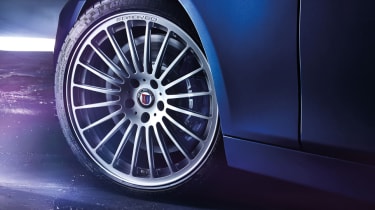 As long as you don’t stray into the last few hundred rpm the auto ‘box changes gear swiftly and smoothly, and while its voice isn’t as rowdy as a current AMG, its deep-chested rumble is natural and easy on the ear, while it crackles naughtily on the overrun from outside.

There is probably only one pothole within a thirty-mile radius of Buchloe, so smooth is the asphalt in this region of Germany, but the ‘50’ appears to ride well. There’s notable roll in Comfort, but Sport firms up the dampers considerably. Even so, it’s no M5, which to be fair, is how its creators envisaged it. The F10 has always been a big, heavy car, and disguising that is a magic trick the current M5 manages some of the time. Not so with the B5, which feels the big car it is in direct changes. Traction is marginal at times as well, and that was on a hot, smooth surface, the B5 slipping into oversteer mid-corner with just a squeeze of the toe.

Better, then, to focus on the 50’s duality of purpose; it’s blistering speed with comfort and high specification, including Alpina’s Lavallina leather that’s the same quality as a Rolls Royce. It’s a recipe that appeals the most to me in Touring form: who doesn’t like the idea of a 201mph 5 Series wagon?

More on B5 saloon 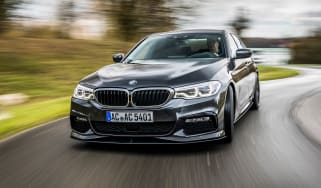 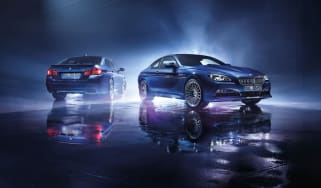 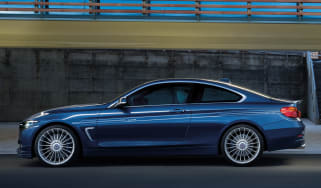 BMW tuner Alpina has announced that it is launching the 4 Series-based coupe and convertible B4 Biturbo model in the UK. Details here
Visit/alpina/b5/11951/alpina-b6-bi-turbo-cabrio-revealed-for-frankfurt 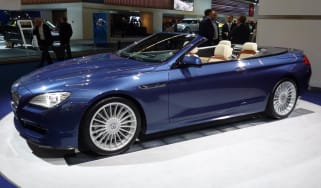 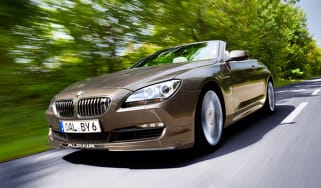 New 6-series-based Alpina B6 is set to debut at the Frankfurt Motor Show.
Visit/alpina/b5/7048/driven-alpina-b5-biturbo-touring 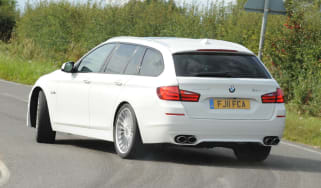 We review Alpina's take on a BMW M5 estate, the supremely fast B5 Biturbo Touring
Visit/alpina/b5/11611/geneva-2011-alpina-b5-touring-show-pics 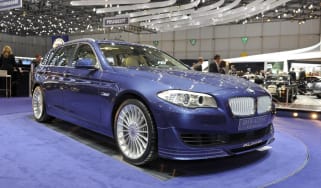 Offering M5 levels of performance, this Touring version of the Alpina B5 BiTurbo makes a great family-friendly performance car.
Visit/alpina/b5/6608/alpina-b5-s 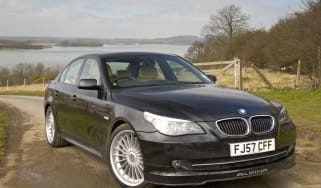 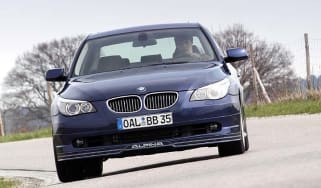