New 6-series-based Alpina B6 is set to debut at the Frankfurt Motor Show. 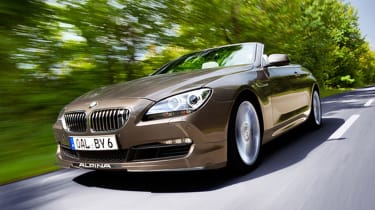 Set to debut at the Frankfurt Motor Show this month, pictures have emerged of the Alpina B6 Bi-Turbo Cabriolet. Based on the recently launched F12 6-Series Cabriolet, the B6 is powered by the same 4.4 litre twin turbo V8 as found in the Alpina B5 salon and estate.

This produces 500bhp at 5,500 rpm and 516 lb. ft. between 3,000 and 4,750 rpm. These huge figures mean the B6 can accelerate to 62mph from rest in just 4.8 seconds and hit a derestricted top speed of 193mph, although it is likely to be restricted to 155mph. Carbon dioxide and fuel economy figures have also been released, suggesting Alpina is as concerned with its environmental credentials as other manufacturers. On these fronts, the B6 posts respectable figures of 255 g/km and 25.9 mpg respectively.

With there being no news yet on an official M6 replacement, the Alpina could prove a worthy alternative, particularly as it likely to use the same drivetrain. There is no word yet on pricing but, seeing as the B5 Touring (based on the F10 5-Series) starts at £75,850, expect the B6 to come in at comfortably over £80,000.