BMW tuner Alpina has announced that it is launching the 4 Series-based coupe and convertible B4 Biturbo model in the UK. Details here 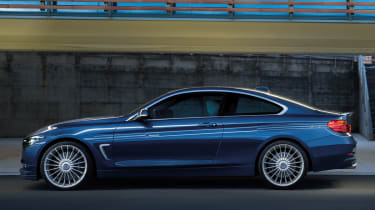 Alpina has announced it will be bringing two new cars to June’s Goodwood Festival of Speed, the B4 Biturbo coupe and B4 Bi-Turbo convertible. Based on BMW’s latest generation of 4-series, the B4 Biturbo produces 404bhp and 442lb ft of torque from its twin-turbocharged 3-litre six-cylinder engine.

Based on the standard N55 BMW straight-six unit from the 435i, Alpina chose to double the number of turbos and in the process uprate cooling as well as adding a new crankshaft. Pushing power through BMW’s eight-speed auto ‘box, the uprated powertrain can accelerate the car from 0-62 in 4.2secs in rear-driven coupe spec, whilst the 225kg heavier convertible takes 4.5secs. In left-hand drive countries buyers can spec four-wheel drive, which improves traction to shorten the same sprint to 4.0secs. Top speed is 188mph for the coupe and 187 for the convertible.

Alpina claims that 37mpg and CO2 emissions as low as 177g/km are possible. That may not be as impressive as the D3 Biturbo diesel equivalent (which produces 53.3mpg and 139g/km of CO2), but with the petrol’s stronger desire to be revved – as shown by the 5,500 revs required to reach peak power – it should be a more rewarding drive.

Essentially the suspension set up has been carried over from the D3, with both cars featuring Alpina springs that offer a 40 per cent higher work rate. Both cars also have switchable dampers that are recalibrated to provide a softer compression but firmer rebound, as well as new bushes and anti-roll bars. But the B4 does receive its own front strut brace and revised geometry to further improve steering response. Coupled with Alpina’s recalibrated steering and stability control software, the B4 should be an even sharper steer than its very capable diesel sibling.

Of course performance and handling would be nothing without proper brakes, so slowing the car down are four and two piston Brembo calipers, working on 370mm front discs and 345mm rear discs. The calipers are painted in Alpina Blue, and sit behind a set of classic 20-inch Alpina alloys wrapped in Michelin Pilot Super Sport rubber – developed specifically for the B4.

In typical Alpina fashion, styling for the B4 remains quite restrained throughout the interior and exterior, with little more than badges, a front lip, rear spoiler and wheels hinting at the car’s performance credentials. Inside, Alpina logos and blue trim are accompanied by heated leather sports seats, but the overall layout is stays in line with the basic BMW. Customisation is almost limitless according to Alpina, with trim, leather and stitching colours all adaptable to customer requirements.

After its public unveiling, customers can order the B4 Biturbo coupe for £58,950, whilst the convertible costs slightly more at £62,950. You can view the cars at Stand 7 of the Goodwood Festival of Speed between 27 and 29 June.