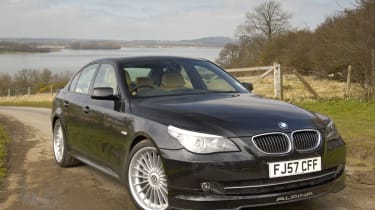 In a world that sometimes seems obsessed by carbonfibre bling, fizz-bang gearboxes and the shock of the new, there’s something wonderfully, comfortingly old-school about Alpinas. Their discreet straight-edged bumpers and blue dials have a style all of their own. It’s a style that doesn’t seem to have changed in years, possibly decades, yet it’s a style that has authority without ever shouting. Alpinas are the pinstripe suits of the automotive world, and the one we have here is a hefting great prop forward of a battering ram in a pinstripe suit.

The black B5 S is waiting outside in the sunshine when I arrive at Sytner BMW, Nottingham, and it looks huge. We tried a B5 a couple of years ago (evo 085) and enjoyed it, but this S version has had several tweaks to answer a few criticisms. The philosophy under the bonnet is still the same: a thumping, supercharged incarnation of BMW’s familiar glorious V8. It puts out 523bhp – 30bhp more than before. The engine is mated to the latest six-speed automatic, which in true Alpina fashion is connected to two pleasing pimple-like buttons on the back of the steering wheel so that you can change gear manually. It’s the suspension, though, where things have taken a step forward with the introduction of EDC (BMW’s Electronic Damper Control) and the ability to change between Normal and Sport settings at the touch of a button.

Rolling southwards out of Nottingham towards Melton Mowbray and its pork pies, the B5 is a pleasingly straightforward car to drive compared with an M5. There are no decisions to make about gearshift speeds, and you choose the amount of power with your right foot, not a button or a menu in the iDrive. The auto shuffles smoothly and discreetly, yet if you ask it to kick down it does so quickly and willingly.

And if you do ask it to kick down then you will be hurled up the road at a pace that an M5 driver might find slightly disturbing; 535lb ft of torque has quite an impact, even on two tons. It’s not all low-down grunt either – the headlong charge forwards simply wells up and up until you reach 6000rpm, at which point the auto calmly and quickly deposits you right back into the next wave of torque. It’s a good car for overtaking in.

Playing in the background whilst all this is going on is a soundtrack that’s mostly a resonant V8 growl overlaid with a hint of supercharger whine. It’s very refined, and even when you’re hammering along it never barges into the cabin shouting, scaring passengers.

The arch-filling 20in wheels help to make the B5 S feel securely planted, and the steering, whilst not having the level of detail of an M5, has an accuracy that inspires confidence. As a result, despite the B5’s size and the way it accumulates speed, you never get the feeling of clinging onto a runaway train.

Press the Sport button and any residual float in the suspension is dialled out by the EDC, while the throttle map sharpens and the whole experience tightens. It doesn’t suddenly become some sort of trackday weapon, but on challenging roads it’s composed in a way that you just wouldn’t think a big automatic 5-series should be. Alpina has cleverly retained the natural balance and fluidity of the 5-series chassis too, and with the addition to this car of a £2500 limited-slip diff, the rear end has a fantastic security to the way it reacts. The only time it eventually feels like it’s running out of ideas is when the big wheels are really loaded up over bumps, at which point they can tend to thump out of contact with the road, briefly stripping away a little composure.

So, it doesn’t have an award-winning V10 or a seven-speed automated manual gearbox or quite as much steering feel, so why would you buy a B5 S rather than an M5? Well, there’s the small matter of more power and torque. Then there’s the bragging right of having no speed limiter and the potential to do 197mph. But most of all I think it’s the fact that the B5 S doesn’t feel like such hard work. If there were two chairs in a room, one a fantastically sculptural work of anatomical constriction, the other a squashy leather job, you’d probably try the contorted plastic one first. But you’d settle happily in the armchair. That’s how the B5 S feels. I reckon if you bought one of these, you’d live with it in utter contentment and never feel the need to change a thing.