Can the respected German tuner eke some hidden performance from BMW’s executive cruiser? 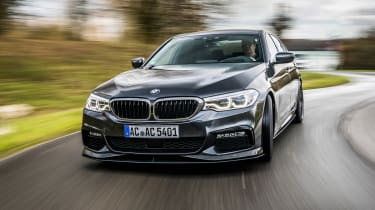 Tuning companies: fly-by-night operations offering stick-on tat, or proper engineering firms making worthwhile and demonstrable improvements? In the BMW world one name stands firmly in the latter category: AC Schnitzer. Fastest road-legal BMW around the Nordschleife? That’s the AC Schnitzer ACL2, the bonkers M235i  equipped with a 562bhp M4 engine. Past Schnitzer records include fastest LPG-powered car (V10-engined 3-series, 197.6mph), fastest diesel (tuned 335d, 179.4mph) and fastest road-legal BMW (V10 M6, 206.2mph). The firm has been fettling BMWs for over 30 years now so it knows its double-kidney grilles, but can it sprinkle its magic on the latest 5-series, specifically the 540i?

For many owners it’s the looks that are most important, so Schnitzer has a range of styling additions – front spoiler extensions, a front splitter, sill extensions, spoilers for the top of the rear screen and bootlid, and a rear diffuser. The wheels are 20-inch AC1 items with Michelin Pilot Super Sports tyres and are matched with a suspension drop (25-30mm front and 20-25mm rear) thanks to new springs.

The car has the firepower to back up its looks as Schnitzer has added an auxiliary control unit that monitors and massages criteria such as air mass, boost pressure and fuel-rail pressure to give 394bhp at 6000rpm and 398lb ft at 3500rpm, gains of 59bhp and 66lb ft. This car also features a rather fruity exhaust – an export version that’s significantly louder than the German-market offering. 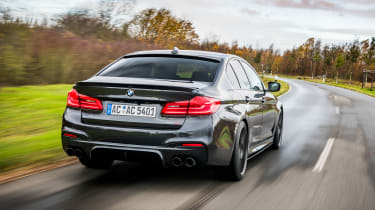 The overriding impression on starting this 540i is that it feels like it’s going to be a naughty companion. It erupts into an angry cacophony that settles to a note that’s acceptable but significantly more aggressive than standard. Inside, the sound is perfectly liveable with in Comfort mode, but ask for full throttle or switch to Sport and the exhaust flaps open to expose an angry alter ego. 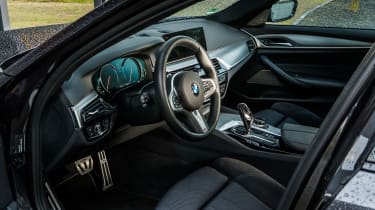 The Schnitzer pulls appreciably harder than a normal 540i when nudging 80mph or so and it’ll romp up to its 155mph limiter on the autobahn. At these speeds the ride’s fine, as it is on other roads, yet when you do push harder there is less body roll than on the standard car, and more clarity to the steering, too.

The downside is, of course, cost. That engine upgrade is £3264, the exhaust is £2560, and the wheel and tyre set is over £4k. The springs are £463 and the styling comes in at over £4000 if you go the whole hog. And this is for parts only, without any fitting and painting charges.

Cherry-pick the parts that suit you, though, and Schnitzer’s upgrades can be worthwhile – if you’re going to be driving a car for three years or so you might as well make the most of it. Schnitzer’s 540i won’t be breaking any speed or lap-time records but it’s a very satisfying steer.