We review Alpina's take on a BMW M5 estate, the supremely fast B5 Biturbo Touring 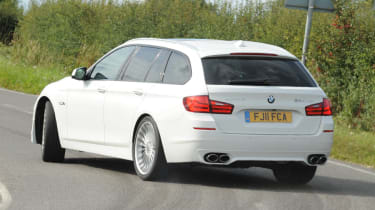 What is it? The Alpina B5 Biturbo Touring, an estate version of the BMW tuner’s take on the M5. Prices start at £75,850. Technical highlights? A monster twin-turbo 4.4-litre V8 engine sends 500bhp and 516lb ft to the rear wheels. It’s linked to an eight-speed ZF automatic gearbox that swaps ratios in 0.18sec and boasts auto, sport and manual modes.  There’s a piece of technology called single-cylinder fade-out, which sees the injection of fuel into a given cylinder very briefly interrupted during gearshifts. This speeds them up, cuts fuel consumption and adds an extra burble to the exhaust note.  Direct injection and variable valve timing also help contribute to 252g/km and 26mpg claimed figures, impressive for a near two ton, eight-cylinder car. What’s it like to drive? Alpina’s products tend to be a less hyperactive but still shockingly fast take on the M car. And Alpina is actually ahead of BMW, who is yet to release its new twin-turbo 4.4 M5. The B5 performs well, though; in more relaxed use it rides well (the suspension can be set to Comfort, Normal, Sport and Sport+) and its supremely torquey engine and smooth gearbox make it a cracking long distance partner. Turn onto a more interesting road and it continues to impress. The steering lacks a bit of feel, but you can still position the B5 accurately, and there’s a lot of lateral grip. Pace between corners is electric, but throttle response could be better. There’s a slight delay between prodding the accelerator and the V8’s surge appearing, one which makes toying with the B5 trickier than it could be. In either of the suspension’s sportiest settings, though, this is a more capable back-road car than it first looks. How does it compare? The nearest alternative is the Mercedes-Benz E63 AMG Estate. £76,020 buys you a 518bhp/464lb ft 6.2-litre naturally aspirated V8, a seven-speed automatic gearbox and up to 1950 litres of bootspace. The Alpina offers up 1670 litres but is a more exclusive and arguably more interesting car. Anything else I need to know? There are no plans to introduce a new M5 Touring, so this could be your only chance to own a big high-performance BMW estate. Also, that E63 AMG soon gets a twin-turbo 5.5-litre V8 engine with more power and equal torque to the Alpina.