What's it like to hillclimb a supercharged Ariel Atom 300? We find out at Prescott Hill 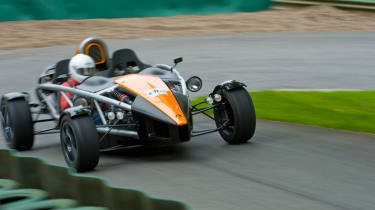 Hillclimbing is one of the oldest forms of motorsport. It dates back well over 100 years, with the first known hillclimb event taking place in France in 1897, while the UK’s Shelsley Walsh course opened in 1905. Yet it still feels off the radar of many British racing enthusiasts. The country’s trackday community is bustling, yet its hillclimb scene is still somewhat undiscovered. Part of its appeal, perhaps, but it’s probably time more people realised that for little more money and maintenance than a track car, they could be campaigning something similar in bona fide motorsport. A day at Prescott Hill’s Drivers’ School proves its accessibility. From just £160 (less than most track evenings) you can spend the day getting to grips with hillclimbing. Prescott is steeped in history. Owned by the Bugatti Owners’ Club, it’s been running events since 1938, with Sitrling Moss and Graham Hill among the names who began their motorsport careers here. Much of this is regaled to us as we’re taken on a walk up the hill to gauge our lines for its half a dozen turns. I’m here with a bunch of Ariel Atom owners, with a supercharged 300 model of my own for the day. Nothing like throwing myself in at the deep end… While Prescott’s leafy, countryside surroundings do much to calm any nerves, our guide – one of the judges who’ll sit at various corners and assess us all as we drive up the hill later -  tells tales of crashes he and others have had at particular points. The exit of tricky uphill left-hander Pardon appears to be a particularly harsh spot. Anxiety suitably stoked, we hop into our cars for a tamely paced sighting run. Atom 300s don’t really do tame, though. Try as I might to trickle along on part throttle, my inner 8-year-old won’t play ball. Its incredibly precise, unassisted steering – a pleasant shock after just about any other road car – also sees me putting on too much lock and nearly taking out a cone on the Ettores hairpin. Good start. Nerves not particularly settled, it’s time for our three runs up the hill before lunch. None of it will be timed, to avoid 40-odd Atom owners turning it into an overly competitive, crash-heavy one-make series, but with a camera-wielding judge at each of the climb’s tricky sections – Ettores, Pardon and the Esses – we’ll get video feedback over lunch. My first run is a sedate feeler of where I’m meant to be going, driving a gear higher than ideal to avoid spinning up the 300’s cold tyres and embarrassing myself early on. Confidence boosted, I crank up the aggression on my second run and nearly outbrake myself into the barriers slowing down for Pardon. Best build up to my braking points, not back down from them. My third run is a slowed back down, yet I also manage to completely mess up the Esses. Our video feedback is played to the whole room, each of our attacks on the three key sections amusingly commentated by our jury. There’s no serious lecturing; advice on how to improve our lines is provided by light-hearted tickings off for being rubbish. It’s an informal and feel-good way to learn, and one which introduces some friendly rivalries to the room. My first run back after lunch, ‘advice’ fresh in my head, is by far my best yet. Pardon and the Esses go particularly well. I’m still far from flying round – the Atom’s searing pace on full throttle shortens the straights to the point corners are too close together for my poor brain to keep up. But hillclimbing requires more technical thinking than a trackday, and going slower to increase accuracy is absorbing as well as advisable. Not everyone agrees, mind. One Atom left the track at Ettores, its driver’s flamboyance earning us all a gently forceful reminder that we’re learning and to take things steady. During which another participant misjudges the final corner, Semicircle, projecting himself down the steep grass bank that surrounds it… With a light air of caution but my confidence still climbing, I head out on my second run. Too much power leaving the Esses sees the Atom’s tail swing out, but I catch it and hold a small, slightly flukey slide. I’ll get ribbed on it when we view the video, but I’m grinning away. Knowing my third run’s my last, I aim for neat and tidy but with more speed than my other runs. It’s definitely my smoothest yet. And being a bit ballsier with the Atom’s eye-widening right pedal, I have an absolute riot. I don’t want to stop doing this. Alas, it’s time to view our afternoon’s videos. My final run that felt so exciting looks pretty tame on screen, and the cameras missed my oversteery moment. All told though, it’s been incredible fun, a relaxed but educational introduction to hillclimbing. With more time (and perhaps an easier to tame car!) I’d really be starting to get the hang of this place. And with timing and competition officially added, I reckon it’d become rather addictive. I urge you to try it.