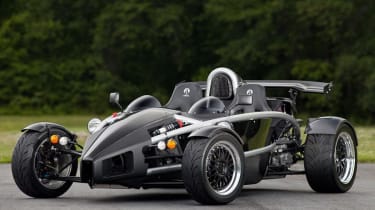 DDMWorks, a North Carolina-based tuning company, has released deatails of its latest and possibly most extreme creation, the 700bhp Ariel Atom Twin-charged.

To increase the Atom’s power by such a degree, the company has completely removed the 300bhp supercharged Honda VTEC engine, and replaced it with a twincharged General Motors-sourced 2.0-litre Ecotec engine.

Pushing the Ecotec engine to 700bhp required some serious internal modification, as well as the fitment of a Garrett GTX 3076 turbocharger, along with the Atom’s existing Eaton M62 supercharger to push the compact four-cylinder engine to 700bhp.

All the plumbing for the turbo and supercharger is custom built by DDMWorks in house, as is the exhaust, tubular manifold and intercooler piping.

There are three selectable power levels, 450, 575 and the full-fat 700bhp. Not much has been done in terms of chassis development, but a new set of super-sticky Toyo R888′s wider custom wheels are fitted.

The company ‘strongly suggests’ that anyone who buys the Atom 700 Twin-charged takes an advanced track-driving course before taking the car out on the road.