Ariel has unveiled an updated version of the Atom, said to be more road-biased 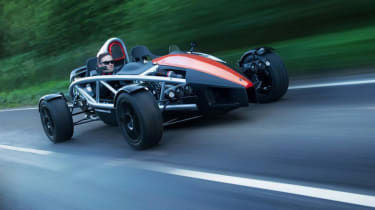 A revised version of the Ariel Atom has been revealed, featuring major chassis revisions, new light clusters and a 10bhp power increase for the supercharged version.

Known as the Atom 3.5, Ariel has developed a much stronger spaceframe chassis, born out of the V8 and Mugen Atoms. This increased torsional stiffness combined with new engine mounts and a softer damper set-up reportedly give the car a more compliant ride on the road, and better balance on the track.

The Atom retains the old and trusty Honda VTEC unit. The supercharged version receives a 10bhp power boost, thanks to a revised intake manifold and ECU re-map, now up to 310bhp. Output for the normally aspirated version remains the same at 245bhp.

Externally, very little has changed. The most noticeable difference is the addition of twin projector headlights, and LED indicators at the front. The previous rear light clusters have also been upgraded to full LED units. A slightly re-profiled bonnet completes the package.