Is this the wildest Ariel Atom yet? We try the lairy new Atom 3.5R on a very wet circuit. Video review here 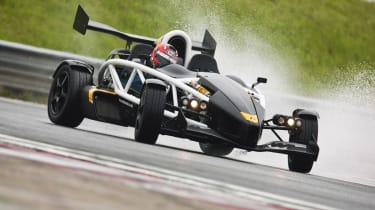 There are few certainties in life, but when you’ve got a circuit booked and a roofless, doorless and windscreen-less sports car to test, you can guarantee it will rain like there’s no tomorrow. Which brings us neatly to Bedford Autodrome and our first taste of the Ariel Atom 3.5R.

It may sound like a software update for your laptop, but the Atom 3.5R is actually one of the most comprehensive upgrade packages since Ariel switched to Honda power. Much of what you see, and plenty of what you can’t, has come courtesy of the insane Atom V8, one of the wilder chapters in Ariel’s brief but impressive history. This, then, is the new flagship of the Somerset carmaker’s range; an already extraordinary recipe intensified to deliver an even bigger hit of adrenalin.

The specification and execution of the 3.5R is enough to make you go weak at the knees. The skeletal and uniquely distinctive lattice-frame tubular chassis looks identical, but benefits from changes made to increase strength, as well as new mounting points for the optional Sadev six-speed pneumatic paddleshift sequential gearbox, originally seen on the Atom V8 and which costs £20,000 alone!

This brilliant ’box of tricks is hooked up to Honda’s familiar 2-litre four-cylinder engine, which Ariel supercharges to glorious effect. In the 3.5R power leaps to 350bhp (up from the non-R 3.5 Supercharged’s 310bhp) and torque to 243lb ft (up from 169). Those are big numbers for a small car weighing just 550kg. As we know from previous Atom experience, the acceleration figures – 0-60 in 2.6sec, 0-100mph in 6.0sec – barely do the head-scrambling experience justice.

Other changes are more obvious, especially on this fully loaded press car. Beautiful gold anodised Ohlins TTX spring/damper units shine from each corner of the car. With a massive amount of adjustment for bump and rebound it’s possible to quickly change settings to suit road or track use without compromising either. Larger wheels (made from magnesium) shod with Kumho Ecsta tyres are taken from the V8, as are the bigger Alcon discs and calipers. The (optional) front and rear aero kit also comes from the V8, and is made from carbonfibre. The sidepods are also optional, housing a chargecooler on one side and an oil cooler on the other, giving the 3.5R a beefier, broader-shouldered look that’s appropriate considering its increased performance.

In total this Atom 3.5R costs £95,000, but as we’ve already mentioned, the Sadev gearbox accounts for a £20k chunk of that. As standard – that’s to say without the sequential ’box, Ohlins suspension, sidepods, carbon aero kit, etc – a 3.5R is £65,000. That’s a great deal of money, but the car looks worth every penny. Besides which, Ariel is finding many of its customers are coming from the top end of the trackday market, perhaps coming out of a 911 GT3 or similar. Ariel and the Atom have certainly come a long way since the early days of the original car and its standard Rover K-series engine. So what’s it like to drive – especially given the sodden conditions we’ve been ‘blessed’ with? The video above reveals all…