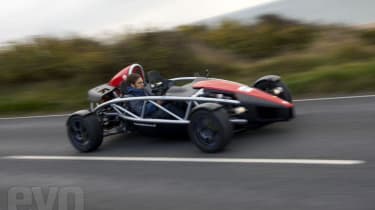 Some of you may be wondering where the Atom 2 went. I was, because I thought the Atom had looked the same since John Barker first drove one way back in the early annals of evo. So I asked Ariel and it turns out the numerical progression is based on engines: the Atom 1 was the K-series car, the Atom 2 the Honda-powered one, and now there’s this, the 3, with, er, a Honda engine. But it’s a new Honda engine from the current Civic. What’s more, the 3 also has more elbow room. And some small pieces of Perspex.

These are not changes that will rock the earth on its axis, but in a car with so little to it in the first place, the merest tweak of an Allen bolt can have quite an impact. Let’s start with the elbow room. Walking up to the ‘new’ Atom you wouldn’t actually guess that there’s anything different about it. Same boat-like outline, same zigzag latticework. But put 2 and 3 side by side and you’ll see that it isn’t the same zigzag. By a clever switch of a zag into a zig, the driver’s elbow is now less pinched-in and Americans can drive the car.

Sink into the Atom (you actually sink a little lower in the 3 due to the seat placement) and you’ll discover that your inboard elbow has got more freedom too thanks to the slight deflation of the big protrusion between the two seats. This also makes access to the gearlever easier, more of which in a moment.

Press the squashy rubber starter button and the Honda engine spins into life, but it doesn’t gently oscillate your bones like the old one. Give the throttle a prod and there aren’t any of the vibrations through the chassis either. This is partly down to the balancer shaft in the new engine and partly due to new mounts.

I’ve covered quite a lot of miles in Ariel’s supercharged Atom 300 in the past and was wondering if stepping back down to the 245bhp car might be a bit of a disappointment, but not a bit of it. It’s still monumentally quick and has the added bonus of the most fantastic induction soundtrack blaring out of the snorkel next to your head. Overtaking is comically easy, and whilst more power is always nice, in truth the 245 is probably a nicer package than the 300.

The new Perspex wind deflectors on the Atom 3 don’t make life much more comfortable and you still need to wear a helmet if you want to both drive quickly and concentrate. However, they do reduce helmet lift, that unpleasant sensation where the slipstream tries to choke you with your chinstrap at speed.

What has got more comfortable is the ride, which Ariel has improved without taking away any sense of connection with the road. You can even twiddle the dial at each corner to set it up just how you want. Most people also go for the big Alcon brake kit fitted to our test car, and its power, progression and feel make it clear why.

The gearshift is also new in the 3. The lever no longer flops between gears and now has a proper, more upright shift, with a throw so short and direct that you can just clench your fist to change from third to fourth. Combined with a smooth engine that now has its VTEC kick at just 3800rpm, it’s a fantastic drivetrain. The only thing that niggles occasionally is the new fly-by-wire throttle, which just doesn’t quite have the razor-sharp response at the top of its travel as a cable-operated one.

The Atom 3’s changes may not appear to be much, but they add up to a car that is noticeably better. It still leaves you buzzing, but for all the right reasons.

See how the Ariel Atom S/C compares against the KTM X-Bow, Caterham R500 and Lotus 2-Eleven