The Aston Martin One-77 experience

Dickie Meaden finds out what it's like to be an Aston Martin One-77 owner on the day you collect your new car. 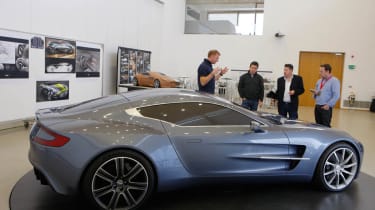 I was lucky enough to be taken on a tour of Aston Martin’s new One-77 build area the other day. Not only was it my first opportunity to see a representative production example of the £1.2-million, 750bhp, 220mph supercar in-build, it also gave me the chance to experience the moment when a customer sees their finished One-77 for the first time.

As you can imagine, the process of selecting colour, trim and wheel options is pretty intense, for you certainly don’t want to get it wrong. One customer has asked Aston Design chief Marek Reichmann to spec the car for him, while another has ordered ten cars.  Should get one right from that little lot.

According to Reichmann, customers usually arrive at their ideal spec after three consultations. With a dizzying choice of beautiful upholstery and brightwork – ‘Would Sir like rose gold or Ruthenium for the switchgear?’ -  it’s an absorbing and exciting process, even if you’re doing it for fun rather than for real.

The build area is stark white, like a scene from a Kubrick film, with a quartet of One-77’s positioned in various states of assembly. Rather than move the cars, as in a normal production facility, the technicians move to the cars, minimising the chance of damaging the paintwork and emphasising the need to get things absolutely right, rather than working to a regimented time period.

Seeing the One-77’s underpinnings is a real insight to the special nature of the car. All the materials are beautiful, from the precise weave of the carbon tub (made by Multimatic in Toronto, Canada) to the high-grade machined billet alloys used in the suspension towers. If you’re the slightest bit geeky about shiny components and clever engineering a naked One-77 is something to behold. One customer is even considering buying one to drive, and one to display in just such a state of undress. Whoever they are, I like their style.

At the time of our visit no less than ten One-77s were in the production facility: the last Verification Prototypes (VP) and the first few customer cars. With a combined value somewhere north of £15-million I hope Dr Bez has topped-up Gaydon’s contents insurance! Aston has taken orders for 60 of the 77 cars. Amazingly all of these orders were placed purely on faith, as there wasn’t a car available for prospective customers to try. Now that such a car exists the remaining 17 cars are expected to find owners very quickly. The first customers are expected to have their cars in time for Christmas.

Those who come back to Gaydon to be handed the key to their car will be treated to a pretty special handover ceremony. In a darkened room adjacent to the production area itself, their car will sit on a turntable behind smoked glass doors. With the lights dimmed a specially commissioned piece of music begins, and a spectacular chandelier designed by London artist Jason Bruges puts on a mesmerising light show. Comprised of 750 OLED panels, the computer-controlled panels set vivid squares of white light dancing across the One-77’s immaculate contours. Deliberately not quite bright enough to see the whole car, the sequence is something akin to a striptease (so I’m told…), then as the music reaches a crescendo the light intensity increases to finally reveal the car in its entirety.

As I stand watching the spectacle, hairs dancing on the back of my neck thanks to the bass-heavy surround sound from the frankly ridiculous Bang & Olufsen sound system, the part of my brain I reserve for generating crazy thoughts on the off chance of a massive Euromillions win thinks this should be the prelude to every One-77 drive. When I say as much to an Aston Martin employee, the arched eyebrow response suggests more than one One-77 customer is considering replicating the £70,000 room for the ultimate Man Cave. I’m assuming their garages are a little larger and tidier than mine: tripping over a lawnmower and a dusty mountain bike might spoil the moment…

You can see what it’s like for yourselves in the video below, although the quality isn’t great due to the evo outside broadcast unit being my old iPhone. Still, you should get a sense of what it’s like. In the second video you’ll also get a short but sweet demonstration of the One-77’s exhaust note and throttle response, thanks to an impromptu start-up courtesy of Chief Programme Engineer, Chris Porritt. The fact that he couldn’t resist doing it, despite covering more than 15,000-miles testing One-77s in the last year, tells you a lot about the emotions the car ignites, and the enthusiasm of the people behind its creation.

It might not challenge a Veyron for raw numbers, but the One-77 seems like an infinitely more exciting machine. I haven’t wanted to drive a car so badly for years.