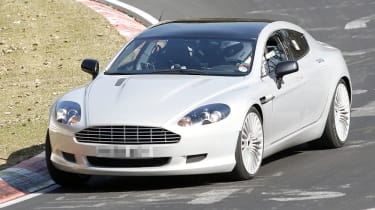 Following the Rapide Concept shown at the North American International Auto Show in Detroit back in 2006, Aston Martin is now coming up with the real machine and is testing the new model at the challenging German Nürburgring. Former owner Ford had put the project on hold when they decided to sell the biggest pack of shares. After selling this to the group led by David Richards, one of the first decisions was to revive the project and start developing the production version Rapide. Together with the body, the DB9 will provide its platform and its V12-engine. The latter will be tuned to 480 bhp while it delivers 450 bhp in the DB9.

The car is believed to be released in 2010 and will hit a highly competitive market - the Aston Martin Rapide will have to fight against Porsche Panamera, Audi A7 and Mercedes CLS.