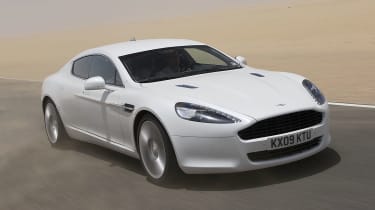 It’s 52 degrees Celsius, there’s a hot wind whipping up the desert into a small sandstorm, and we’re on a road arrowing us straight at the Iraqi border. Kuwait isn’t really the place I was expecting to have my first encounter with the new Aston Martin Rapide.

We’ve joined the car’s development team hot weather testing and the Middle East is a rather apt location. The eastern world prefers its premium cars with a full complement of doors, so the Rapide is set to be key in establishing Aston in emerging markets such as the Arab states and China.

When we first see the Rapide, initial impressions are of a car just like the concept – a longer DB9 with a smidge more practicality. There are subtle differences, though. Sleeker headlights and a more intricately contoured roofline adjust the proportions enough to alert trained eyes should one pop up in your rear view mirror. And the rear styling is neater and somehow better resolved than the coupe’s. That’s despite containing a sizeable hatchback in a rear overhang of near identical size and shape to the two-door’s.

Yep, a hatchback. Like the Porsche Panamera, the Rapide boasts five doors rather than four, although you won’t hear the H-word from either manufacturer. The two aren’t going to be direct foes, however – the German boasts luxurious levels of space in its rear quarters, while the Rapide is more of a 2+2. Its rear pews provide enough room for a couple of average-sized adults on a trip to the pub or a short commute, but they’ll need to contort themselves a bit, while the high transmission tunnel and shallow rear windows add to the feeling of snugness.

During its development, Aston’s benchmarks for the Rapide have been the Mercedes CLS, Ferrari 612 and Maserati GranTurismo – performance cars that all boast rear seats but are unlikely to have been bought with chauffeuring duties in mind. Kids should be just fine, though, making this an Aston for the family man. Or, indeed, for a wealthy and emerging Middle East market.

The climate is surreal – it feels like we’re bordering the sun, not Saudi Arabia, with the heat seeming to hit you as much from the ground as from the sky. Virtually the full day will be spent in or around the car, and we’re not going to see less than 45 degrees on its temperature gauge. It’s actually an environment harsher than that served up by North America’s Death Valley, a traditional hideout for prototype cars like these.

These are the advanced stages of the Rapide’s testing, with the final production-spec car being revealed at September’s Frankfurt motor show. The development programme has been going on since June 2007, when Aston Martin’s new shareholders – backed by Kuwaiti investors, funnily enough – gave the go ahead for the 2006 concept to go into production.

After a computerised design and packaging study, two very rough DB9-based mules (codenamed X1) began testing, one focused on ‘thermal and cooling’ and the other on ‘powertrain and dynamics’. Aston then built five bespoke Rapide prototypes (called M1) on which the bulk of development – especially the underbody stuff – was carried out.

We’re part of the next stage, where 14 much more advanced cars – Verification Prototypes (VPs) – are used to rigorously check lots of specific parameters in specialised locations: durability at the Ring, for instance, and brake noise testing at Nardo. Just a few Tooling Tryout (TT) cars will undergo final analysis this October and they are intended to be in saleable condition, which makes the VP stage crucial for picking up problems and ironing out any niggles.

The car I’m helping out with is a VP designated for poring over the heating, ventilation and air conditioning (HVAC), which explains the toasty choice of location. Our day will pan out just like the many that have gone before it for engineering chief Simon Barnes and his crew: a full morning spent driving through Kuwait’s baking desert heat, with a full complement of passengers enjoying fresh icy air, cooled seats and a bit of Arab radio. It’s all intended to push the Rapide’s alternator as much as possible.

To break up the day there’ll be a long lunch with the car languishing outside in the midday sun, fresh from its torture in the desert. As well as raw temperature, one of the big factors impacting upon a car in a baking climate is solar load, and this will be a stern test of how the Rapide deals with it. Think of when you’ve hired a car on a Mediterranean holiday: you leave it parked up and on returning, even a short time later, you’re greeted by a relative furnace as you climb back in. That’s the effect of high solar load.

Aston has done factory testing of the Rapide up to 1000kw/h of the stuff, a realistic maximum. But a couple of hours parked in the early afternoon sun sees our test car reach 1100kw/h. Touching the scorching windows reveals the battle the car’s HVAC has had on its hands, yet within a minute of flicking the air conditioning on the interior returns to being a bearable environment.

The Rapide will be the first Aston Martin built, perhaps controversially, outside Britain. Customer cars will start rolling out of Magna Steyr in Austria at the beginning of next year. Aston cites major production differences between the Rapide and its stablemates as the reason for the move abroad. Under the skin, though, things aren’t worlds apart. The engine is the 470bhp 5.9-litre V12 from the current DB9, mated exclusively to the company’s Touchtronic six-speed auto. Only small tweaks have been made to compensate for the four-door’s added weight and inertia.

The Rapide certainly goes well enough, dishing up its acceleration in smooth waves of torque and with a snarlier engine note than in the two-door, too. Stick the gearbox in D and it briskly shuffles its way up to sixth (to reduce consumption and emissions), although that’s hardly a constraint when the engine’s producing 442lb ft.

The suspension is similar to the DB9’s, save for some beefing-up to handle the extra bulk. The big change is the rear subframe, which boasts a cast and extruded aluminium assembly compared with the steel tube structure of the DB9 and V8 Vantage.

There’s a quicker steering rack than the DB9’s (15:1 versus 17:1) and the shorter final drive from the DBS (3.49:1 plays the DB9’s 3.15:1) too, but these changes are designed to put the Rapide’s dynamics in line with its coupe sibling rather than trumping it. Two-stage active damping is lifted from the DBS, but programmed to accommodate the saloon’s different springs and dampers.

The brakes are all new, though: the discs a combination of cast iron and aluminium, ventilated and grooved and measuring 355mm at the front, 330mm at the rear. They’re designed to offer near fade-free performance, and certainly impressed during our afternoon’s strenuous braking tests.

Their size means 20in rims are your only option, but matched with this test mule’s white paint, the showy wheels sit perfectly on Middle Eastern roads and the Rapide grabbed plenty of admiring glances as we meandered through the traffic of Kuwait City.

How will it fare in Britain’s more shivery climes? We’ll have to reserve judgement until we drive one early next year, but for now it feels remarkably like a DB9, just with more space for kids and clobber. With the Rapide, the Panamera, the new Mercedes CLS and new Maserati Quattroporte, competition in the fast four-door segment is about to get a whole lot hotter.