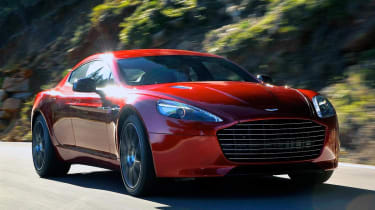 The Aston Martin Rapide has been updated. After three years on sale, it enjoys the same soft restyling as its DB9 and Vantage stable mates rather than being given fully-blown redesign.

The Rapide S, as the model is now known, gains Aston’s new ‘AM11’ V12 engine. While measuring same 5.9 litres as the outgoing Rapide’s engine, it’s a freer-revving unit thanks to a new cylinder block, heads, intake system and stainless steel exhaust, with peak power climbing a healthy 80bhp to 550bhp. Torque rises to a lesser extent, from 443 to 457lb ft, though there’s a bigger percentage of it at the lower end of the rev-range.

The engine sits 19mm lower in the Rapide S’s body, improving agility, while torsional rigidity is upped too. The stability control has been revised (namely to handle that 17 per cent power increase) while updated adaptive damping technology – so capable in the new DB9 – offers Normal, Sport and Track modes.

The Rapide S’s new styling will be most noticeable to many, though. While it’s hardly dissimilar to the car it replaces, a more aggressive front grille and new alloy wheels give it a more muscular look. An optional Carbon Exterior Pack provides extra attitude, the front splitter, rear diffuser and other exterior details fashioned from carbonfibre. There are new trim options inside, too, where there have also been noise insulation improvements.

Prices have not yet been announced, but the Rapide S is expected to cost little more than the £149,995 Rapide it replaces. The Rapide which did rather well in our supersaloon group test in 2010…