A specially built gold-plated replica of the Goldfinger Aston Martin DB5 has gone on sale, via an online Christies auction. Details here 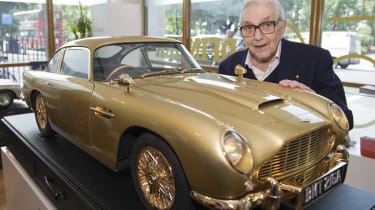 James Bond film creator EON Productions has commissioned the building of a unique gold plated Aston Martin DB5 to be sold for charity this month. Raising money for the NSPCC, the third scale Goldfinger replica has been signed by Sir Ken Adam, the Bond production designer who famously designed the Q branch modifications for Sean Connery’s 1964 car.

Plated in 24-carat gold and built by Proshop – the prop maker responsible for building the DB5 replicas used in Skyfall – the new replica has been accurately created thanks to the use of 3D scanning technology and an original car.

The gold car comes fitted with radio controlled machine guns, a bullet-proof shield and revolving number plate, just like the ’64 original. As the only one of its kind in the world to be built under licence, the Goldfinger model looks set to sell for between £40,000 and £60,000.

While that may seem like a lot of money for a model replica, it is somewhat dwarfed by the cost of an original working DB5. Well maintained examples frequently sell for upwards of £500,000, whilst convertibles can command more than double that.

Joining the gold DB5 at the Christie’s auction will be a unique Goldfinger Seamaster Aqua Terra watch, which is also made of 18k gold and features a 007 counterweight. The watch is expected to sell for between £8000 and £12,000, whilst a first edition Ian Fleming Goldfinger book, British cinema poster for the film and special (one of 40) Daniel Craig signed golden edition of Taschen’s The James Bond Archives are all expected to sell for between £1000 and £2000.

The bidding takes place online between 8-17 September at www.christies.com/goldfinger. To add to the nostalgia, the auction’s closing date coincides with the 50th anniversary of the world premiere of Goldfinger, before the Limited Edition gold SteelBook Blu-ray goes on sale on 22 September.

Nicolette Tomkinson, Head of Popular Culture at Christie’s, said: ‘The Aston Martin DB5 is clearly an iconic sports car. However this Goldfinger model version, with 24-carat gold detailing, is truly unique and as such we anticipate worldwide interest and competitive bidding. We are confident that this online-only sale will raise a significant sum for the NSPCC.’

The NSPCC (National Society for the Prevention of Cruelty to Children) is a charity working to ensure the protection of vulnerable children in the UK.